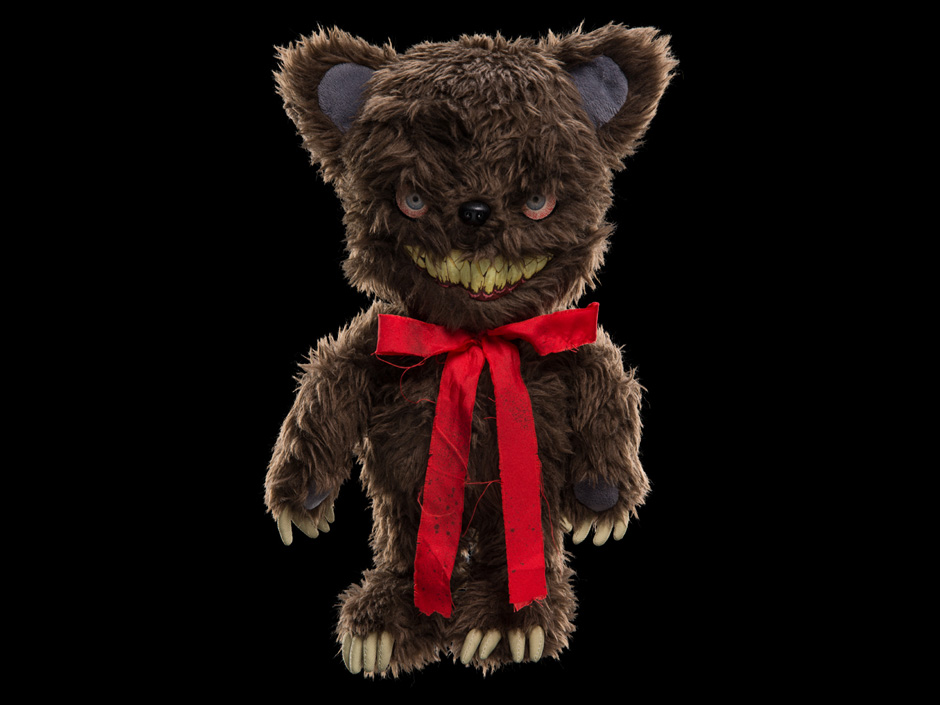 I want to be on record by stating that any and all claims insinuating that a genetic Krampus/Bear clone may have escaped our biotech laboratory are patently false and thus should be considered fake news. We here at Evil Speculator have made maximum security and strict biohazard procedures our top corporate mandate, which is exactly why we purchased a dozen refurbished Chinese thumbprint readers last year to secure our entire operation.

Alright, I hope this intro precipitated an admittedly undeserved chuckle as the remainder of this post is not going to be quite as farcical. Quite to the contrary in fact as several of my momo charts are flashing signs of great concern. 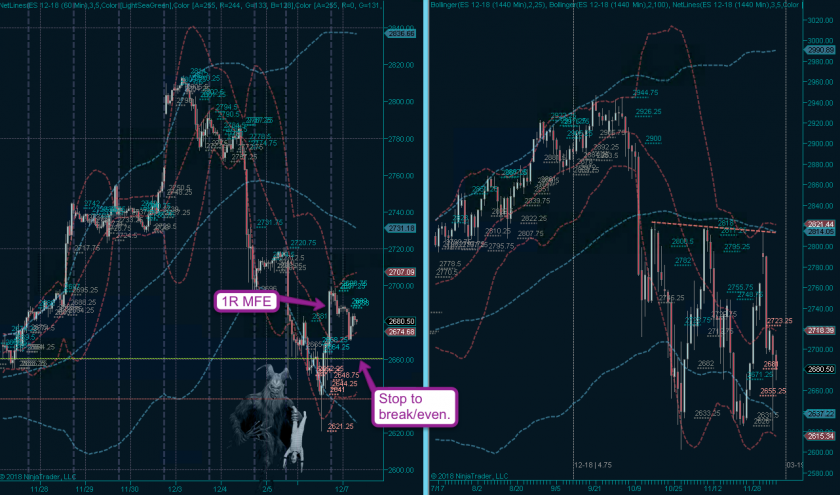 Which may come as a surprise to many of you after watching me take a long entry yesterday late in the session when the Zero signaled the possibility of a snap back. That however was only a short term campaign and my current expectations of success, after reviewing the momo outlook posted below, have greatly been dampened. 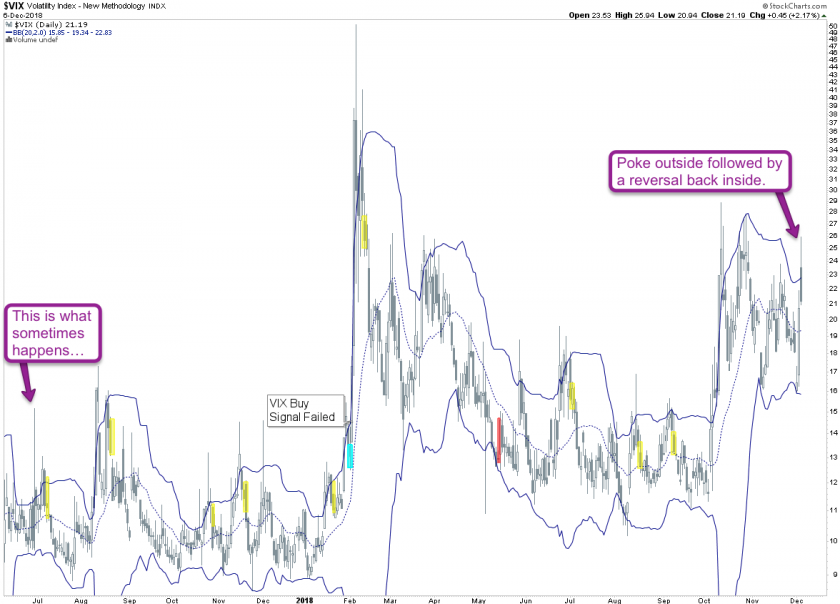 Let’s start with the easy stuff. The VIX poked outside its Bollinger yesterday and then closed back inside. Now you may think this would be a good thing but quite often it is not as it is followed by another spike higher a few days later. As a dip buyer what you want to see is a close outside followed by one back inside, preferably then followed by a close even lower, a.k.a. the VIX Buy Signal. 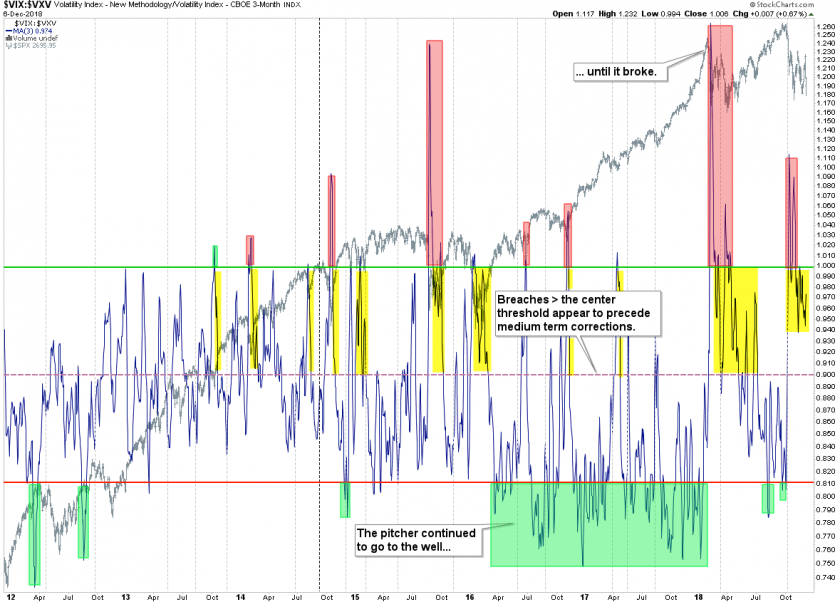 Since spending quite a bit of time above the 1.0 mark, the Implied Volatility Term Structure has dropped and remained below the mark thus far. However it has not been able to recover < 0.9 which truly is the threshold after which equity traders are starting to relax.

But looking at this chart I noticed something else. Mainly that the period of time during which the IVTS remained stuck between the 1.0 and 0.9 mark after a spike above 1.0 has markedly increased over the past few years. I do understand that bull markets climb the wall of worry but it usually results in a sequence of mild reversals that serve as BTFD opportunities for the pros. 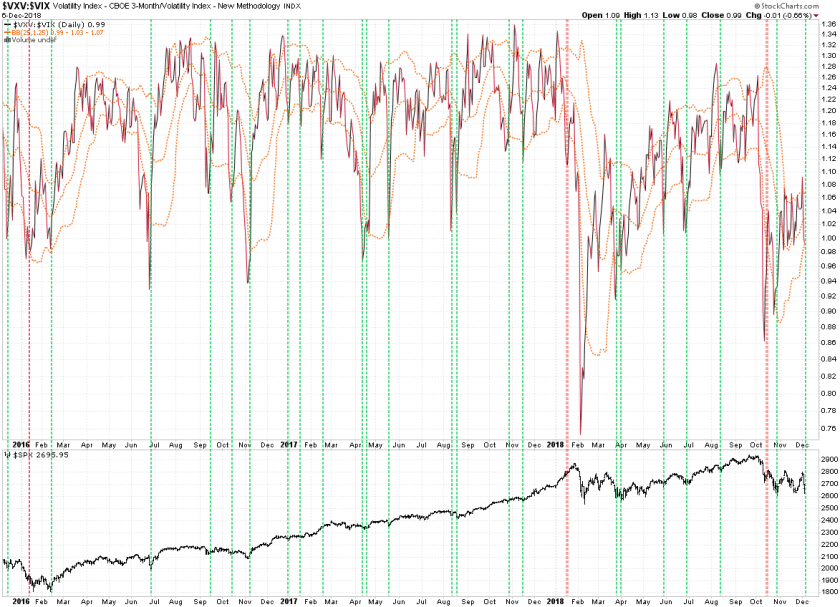 The inverted and slightly smoothed ratio pointed at a buying opportunity here at the close but this frankly is one of the few positive signs on my momo horizon right now.

As always the good stuff is waiting below the fold…