I’m filling in for Berk tonight who’s out working on his devious pet project of genetically cloning recently obtained mammoth DNA with that of a black bear (hence market domination).  So it’s going to be a quick one since I’m not receiving enough chocolate bribes as of late.

Today’s tape was a triumph for the bears to say the least, but I’m sure by now you’ve been exposed to much fanfare on that front. A 300+ drop on the DJI after massive bailouts and a limited ban on short selling. How’s that working out for you? Not so good it seems… 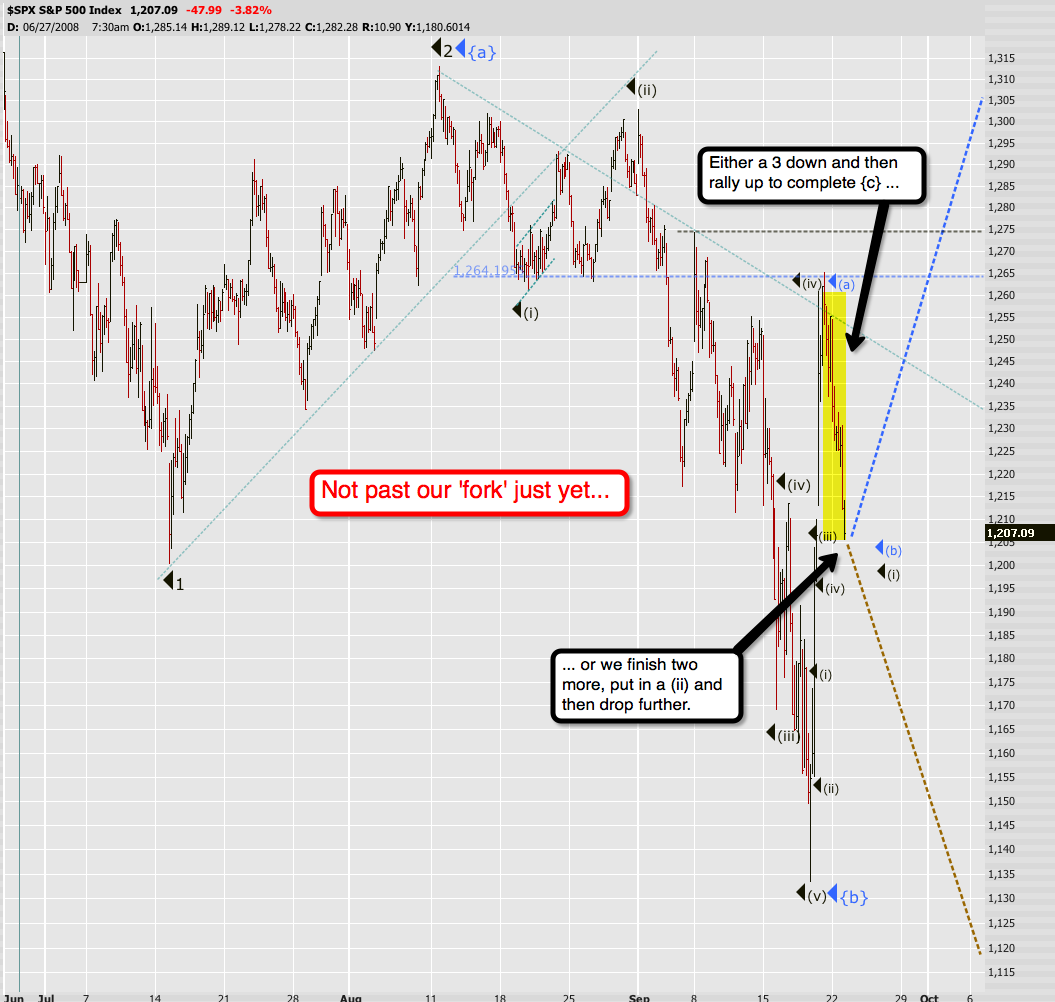 But before you leeches pop your dusty bottle of Cristal I need to call for extreme caution as there is still the potential for a bullish reversal on all fronts. Today’s tape leaves the door open for the {a},{b},{c} scenario I outlined yesterday. We most likely will see some clarification tomorrow. Right now my money is on the bearish case as the breadth closed at 13.4:1 negative (of course that could indicate we’re oversold as well). Not bad for a day’s work, but I’m sure the PPT gnomes are sticking poisonous darts into their life size voodoo-bear-doll as you’re reading this. 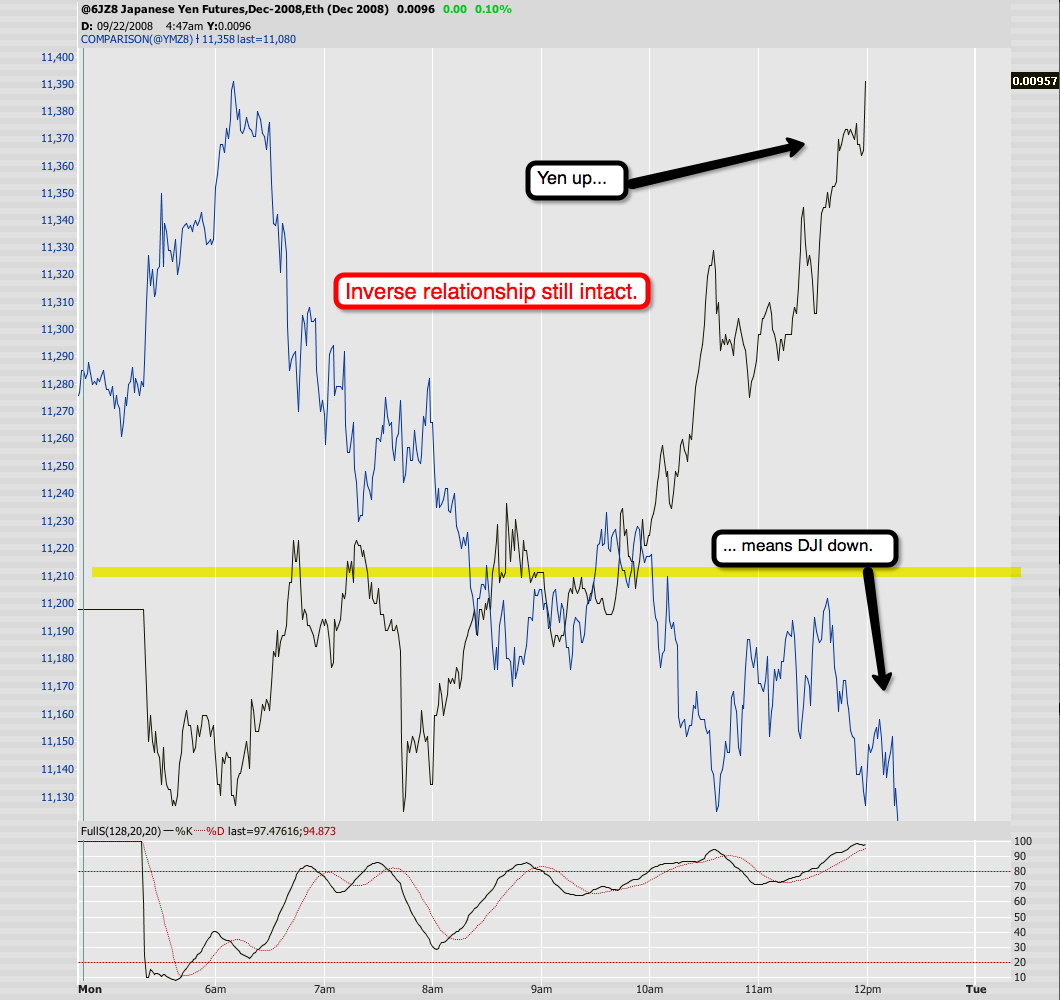 Can you say - goodbye carry trade?

The Yen/market correlation is still in full force I’m happy to say, although the TNX wasn’t playing ball for most of the day but then caught up towards the close. Maybe the bond holders didn’t know what to make of all this – aren’t they supposed to be the ‘smart money’? Anyway, watch the Yen boys and girls – Yen up = market getting hammered and the inverse. 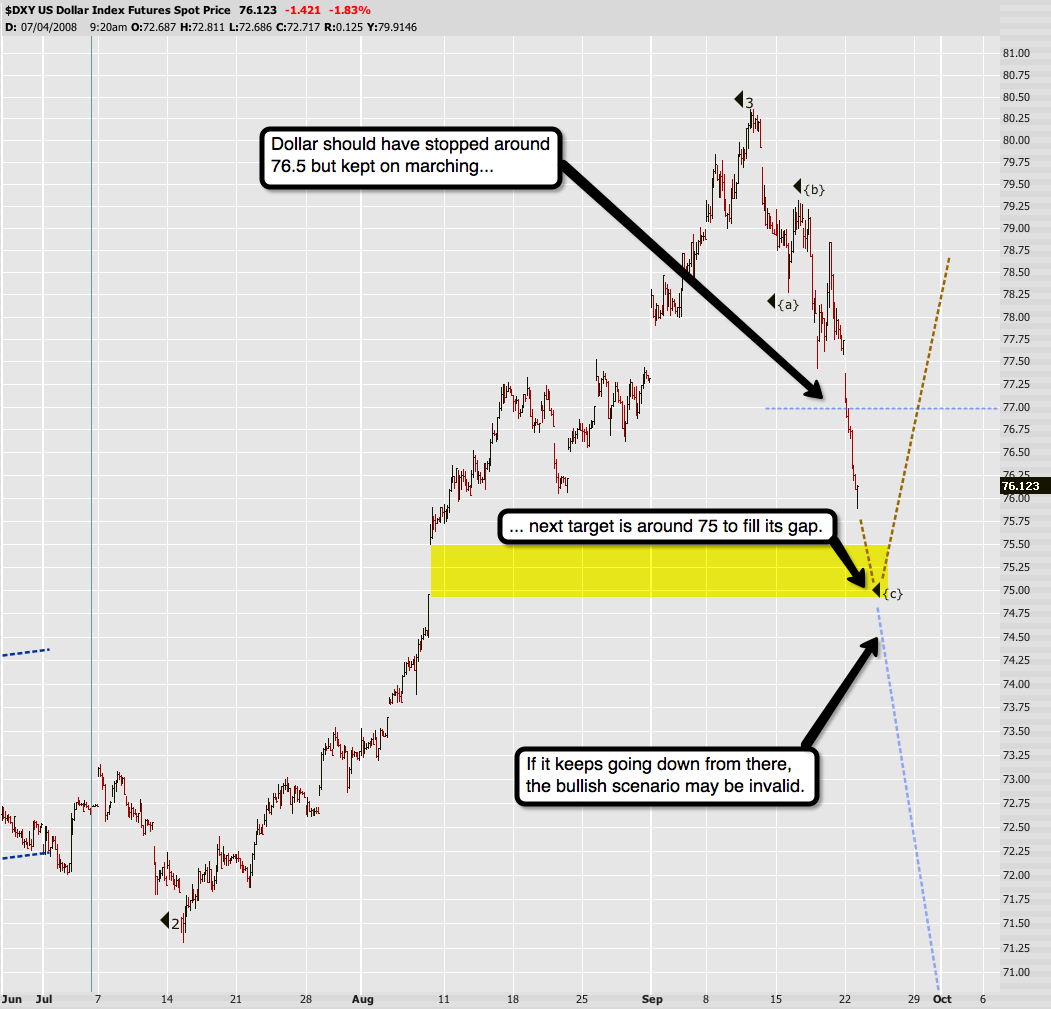 The Dollar filed a sexual harassment suit late today as it is getting sick of taking it up the rear from the PPT. I actually expected a bit of a bounce here, but it seems the Chinese, Japanese, and Russians are finally realizing that the jig is up and are slowly closing out their treasury holdings (if they are smart – and they usually are). This of course is good for the bears and if the Dollar drops through about 74 the bullish scenario for the Dollar is completely shot to hell. That would be a crowning moment for us bears, as a buck in bear mode would do nothing less than pull the carpet from underneath the market. 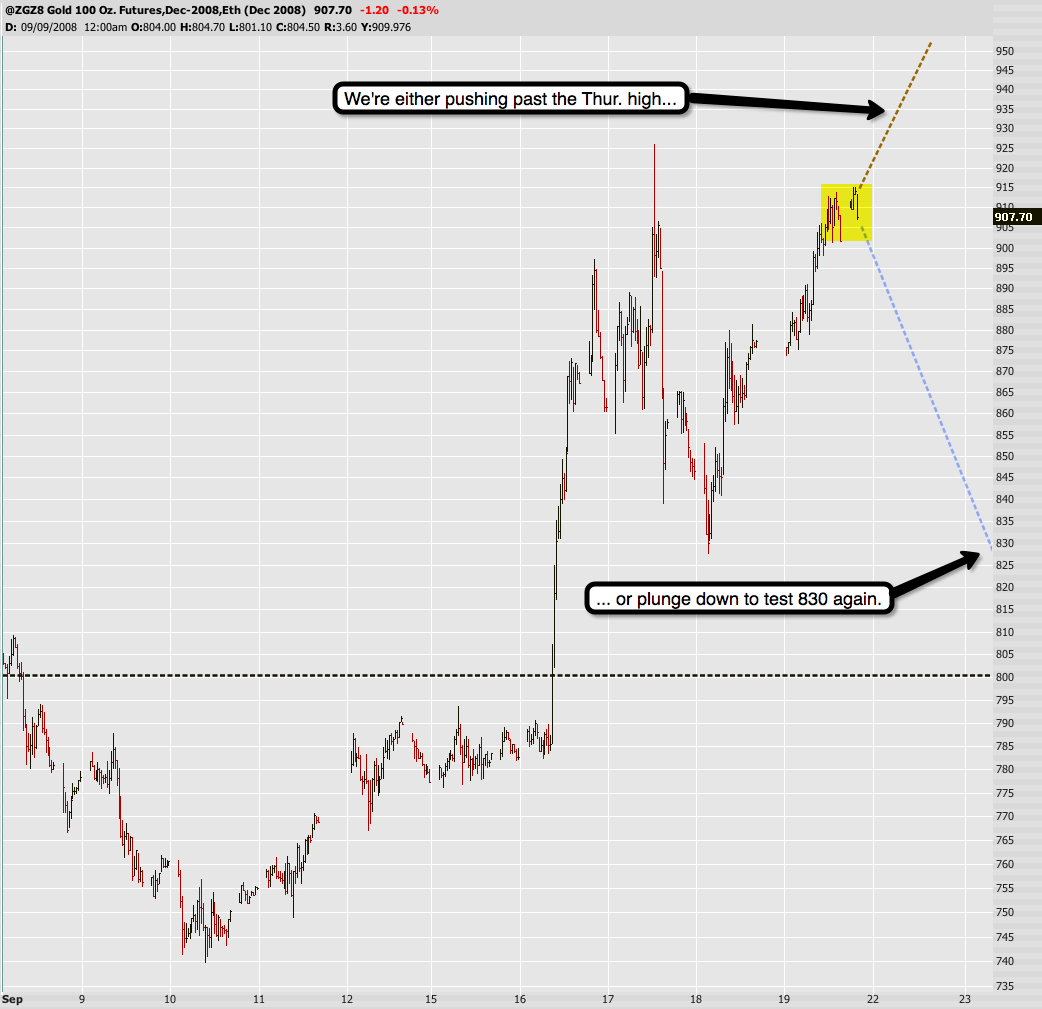 Gold could go either way.

My apologies for being so ambiguous on Gold as well, but things could play out either way here. I’m not in Gold right now but went short PAAS (Silver related) after closing out a long position. I’m not fully convinced Silver is going to drop much further but I hoped to scrape a few points until tomorrow when we most likely will get some clarification.

That’s all I got for tonight. If you’re massively delta negative a little hedge tomorrow after the open might be good medicine. The bears are NOT out of the woods yet, which I realize is not a good analogy in this very context. Keep your exposure limited until we see some clarification. Once we’re greenlighting the bearish case we expect to go medieval on FSLR, BIDU, RIMM, DECK, MA, XL, GOOG, XLU, and many other victims.

Special props to AAPL which made me a pretty penny. I posted a chart early in the morning at the slope – who took that trade and smiles tonight?

I leave you with this: 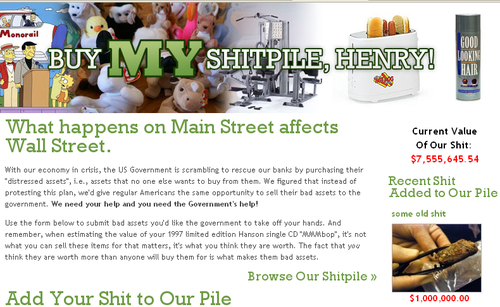