“You have a choice to make. You take the blue pill, the story ends, you wake up in your bed, and you believe whatever you want to believe. You take the red pill, you stay in Wonderland, and I show you how deep the rabbit hole goes.

Remember…. all I’m offering is the truth, nothing more.”

The red pill? Alright, grab yourself a beverage – this is going to take us a bit of time. Let’s take a brief stroll down memory lane, courtesy of our friends over at ‘the big picture‘. Just so happens that he tape of the last two days represents the strongest 2-day rally since 1929: 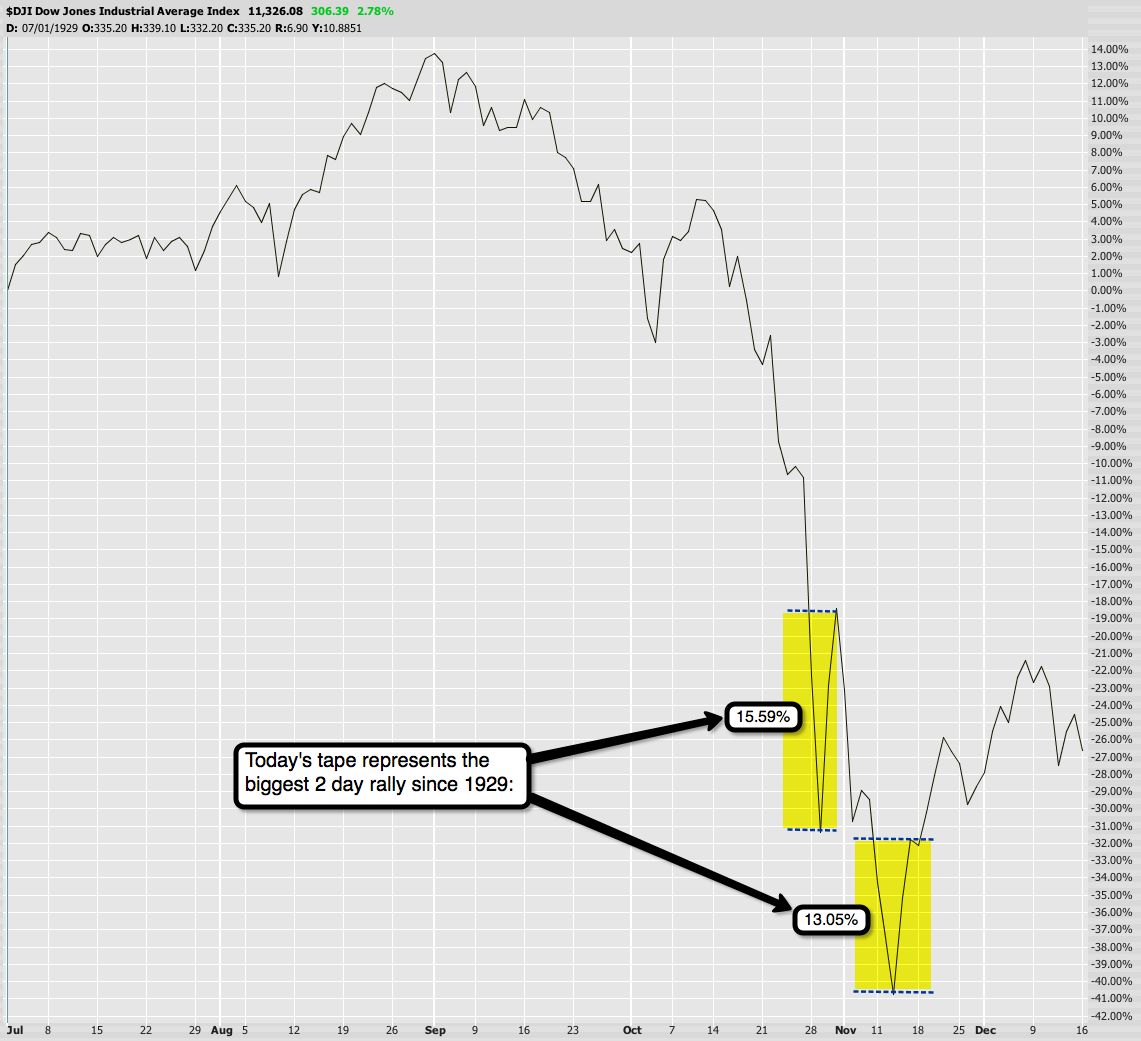 Nice 2-day rallies! What a bullish sign they surely thought in 1929.

1929 – that year sounds mighty familiar, doesn’t it? Now let’s see how those bullish monster rallies worked out for those traders of yore a little further down the line: 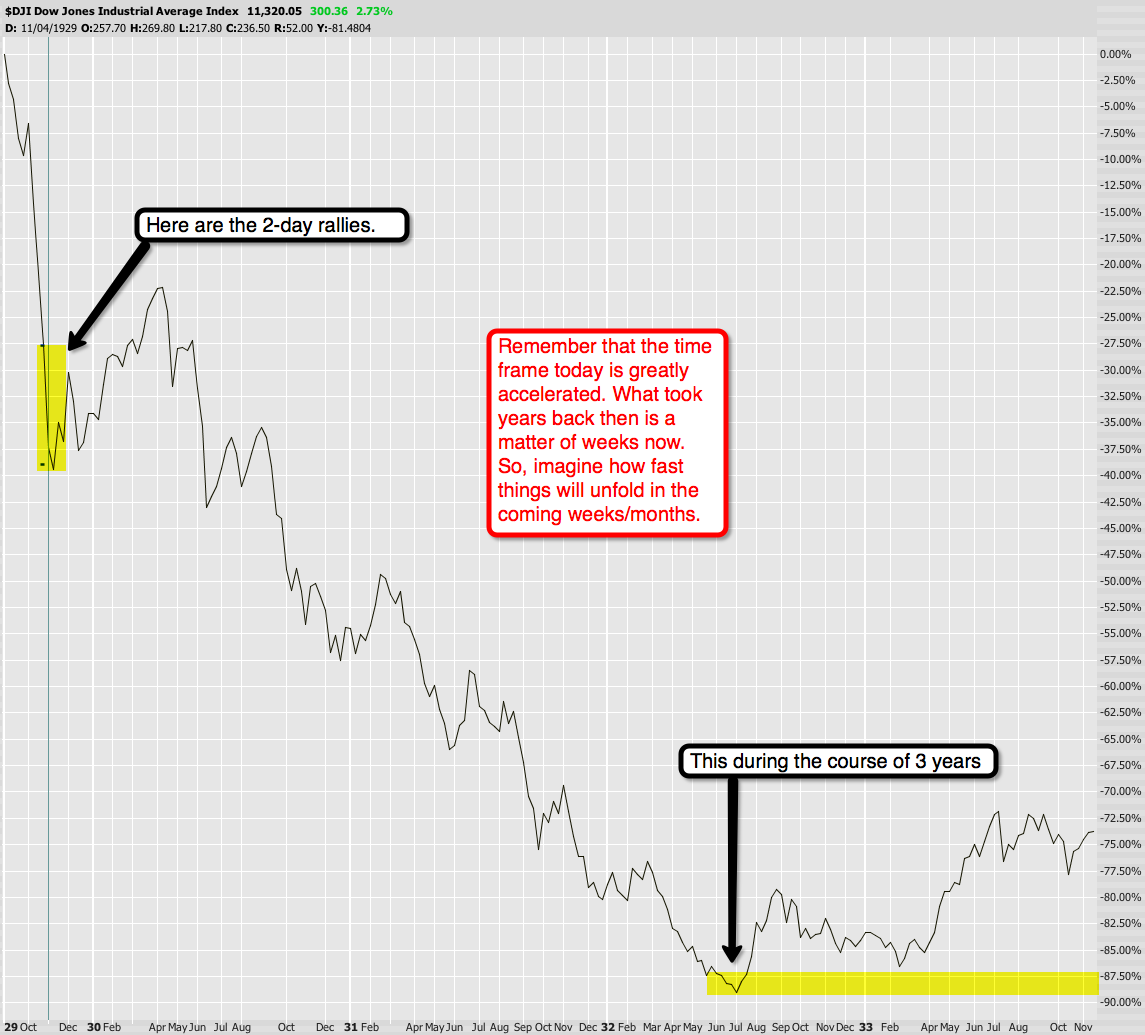 Not so good it seems. Perhaps there is truth to the notion that bear markets produce the sharpest bull rallies. Unless of course you took the blue pill and you’re convinced that history never repeats itself.

Of course one could say that they didn’t have the PPT at hand back then and that the new short selling ban will surely change things for the better. After all, it’s those evil short sellers (mainly Berk, Tim Knight, and yours truly) who caused the market to drop in the first place, right? And now that it’s fixed the market is bound to surge to new highs! Good times are afoot!

Well, if you really think that I’ll have to burst your bubble. And this time I don’t have to go back 81 years to make my point. Here’s a 2008 chart of the Karachi 100 (Pakistan): 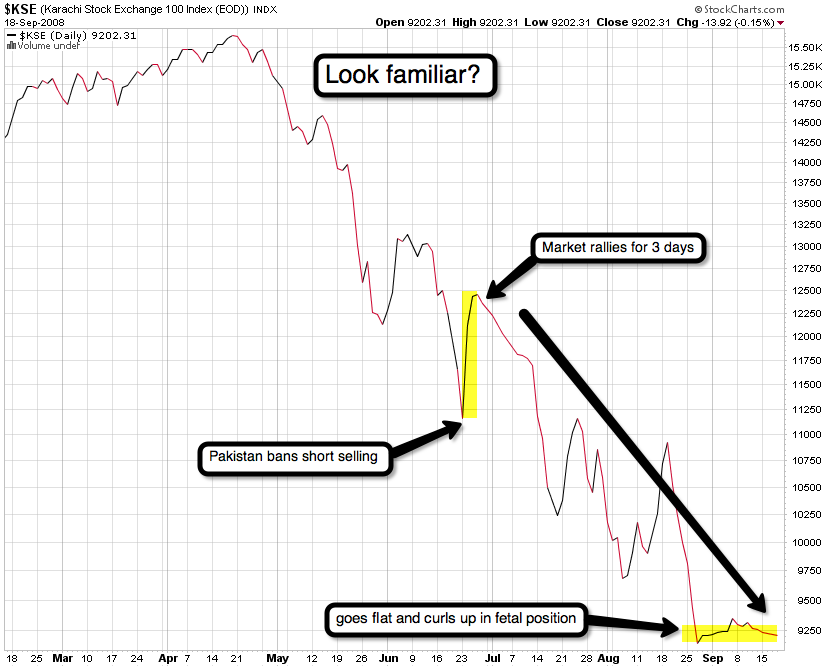 Some things to keep in mind:

Could it be that banning short selling is not such a great idea after all? Sure looks like a possibility. Could it be that both PPT and SEC officials were unaware of the ineffectiveness of a similar ban in Pakistan? Very doubtful. Could it be that the SEC just shot itself and the equity markets in the foot and that royally? Most def.

Naturally, if you were in delta negative in the last two days this may be of little consolation to you, and what you really care about is how to avoid getting trapped like Bambi in the headlights again going forward. That of course is the tricky part – obviously trading options is tough enough to begin with – most folks wash out even during the good times. Throw in arbitrary government interventions, federal bailouts, and the occasional market rules change and the task becomes almost impossible.

Now, you’ve probably heard of this expression: Fool me once, shame on you – fool me twice, shame on me!

Sounds good in theory, but in order to not fall into this trap again we need a little intel. As you know, here at Evil Speculator we aspire to reduce the noise and offer high probabilities in market trends. We don’t have a crystal ball, otherwise we would have gone long on Thursday around 1:00pm (arrrgghhh – okay, give me a second….. alright… I’m good….). However, what we DO have is an excess amount of IQ points, help from our legions of nefarious minions, plus an unquenchable desire to beat the PPT at its own game. To that end the answer may lie in our charts – if we just would bother to look in the right place. Lo and behold, a hint was revealed to us this weekend by an esteemed fellow trader going by the mythical avatar of MarketMinotaur: 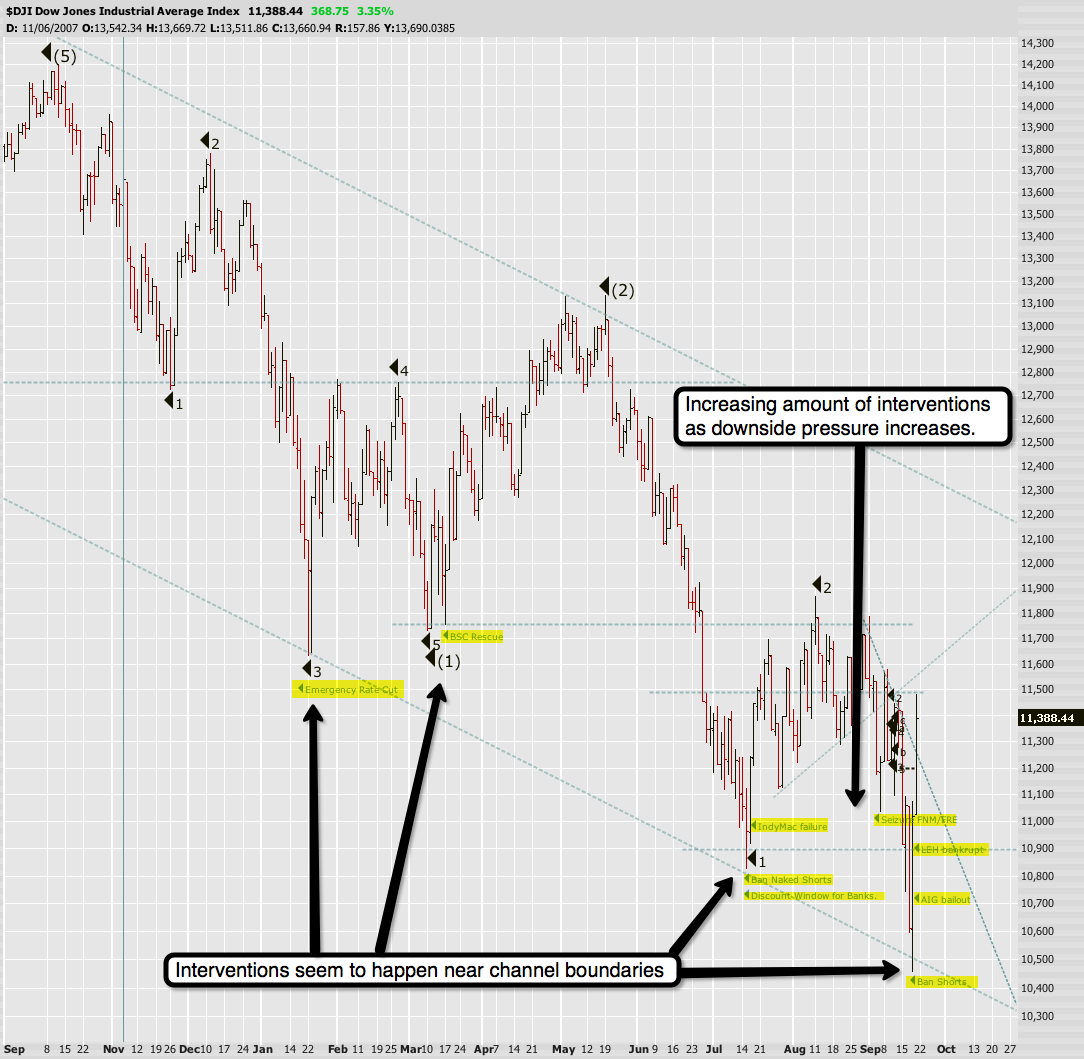 There seems to be a pattern to interventions.

The guy seems to not just be hung like a horse, he also appears to bring some fine skillz to the table. Unless of course he stole it from somebody else, in which case we respect him even more. I took the liberty to refine his chart a bit so that the pattern of interventions is more apparent. If you draw a simple channel connecting the tops/bottoms of the last year it becomes clear to even the mentally challenged among you that the lower channel line appears to be the psychological panic threshold for the PPT. 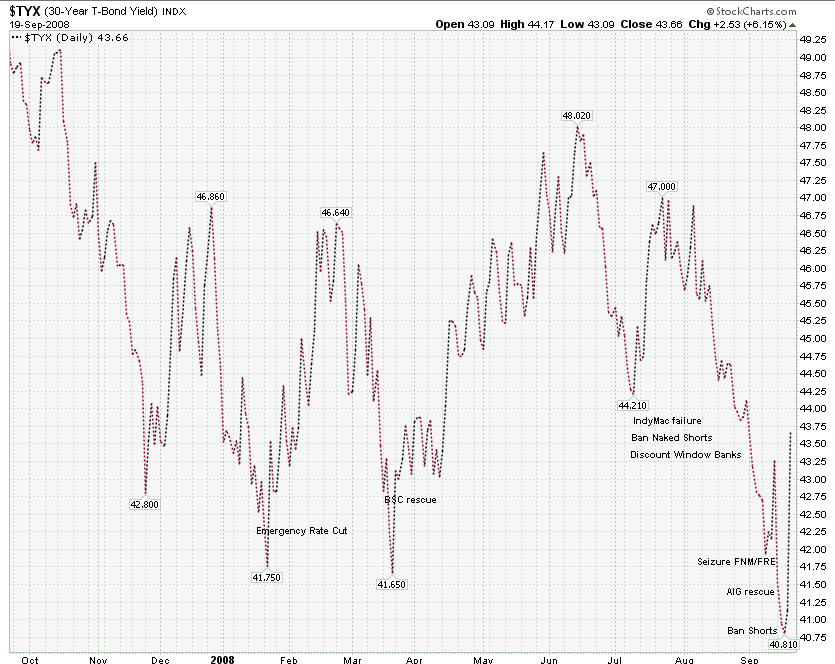 As I’m not completely useless around here I have also been able to correlate this with the yields in the 30-year treasury, which seems to confirm the same pattern. It’s not as clean and a bit more relativistic, but in combination with the price channel appears to give us a good indication as to when it may be time to ‘pull out’.

However, as of right now most of us are probably licking our wounds and wondering what’ll happen next. Will we continue to rally or are we going to drop from here and it’s time to load up on puts? This is where I need to caution my impatient disciples of doom – right now is not the time to jump back into the market. First up we need to make sure that options will be reasonably priced again and in that context I’d like to share some great news Tom Sosnoff from TOS sent me today:

Statement of SEC Division of Trading and Markets

“The Commission staff is recommending to the Commission a modification to its order prohibiting short selling in securities of specified financial firms. This modification would extend, for the life of the order, the exemption for hedging activities by exchange and over-the-counter market makers in derivatives on the securities covered by the order.”

It’s good to know we’ll actually have an option market to return to come Monday – one down. Secondly, volatility is still mighty high and unless Mr. VIX drops below 26 buying puts is not recommended as you’re giving up a lot of potential profit (I guess you could be selling calls if you eat your breakfast cereal with a razor blade while jumping out of a plane). Thirdly, it seems that we once again find ourselves at another fork in the road: 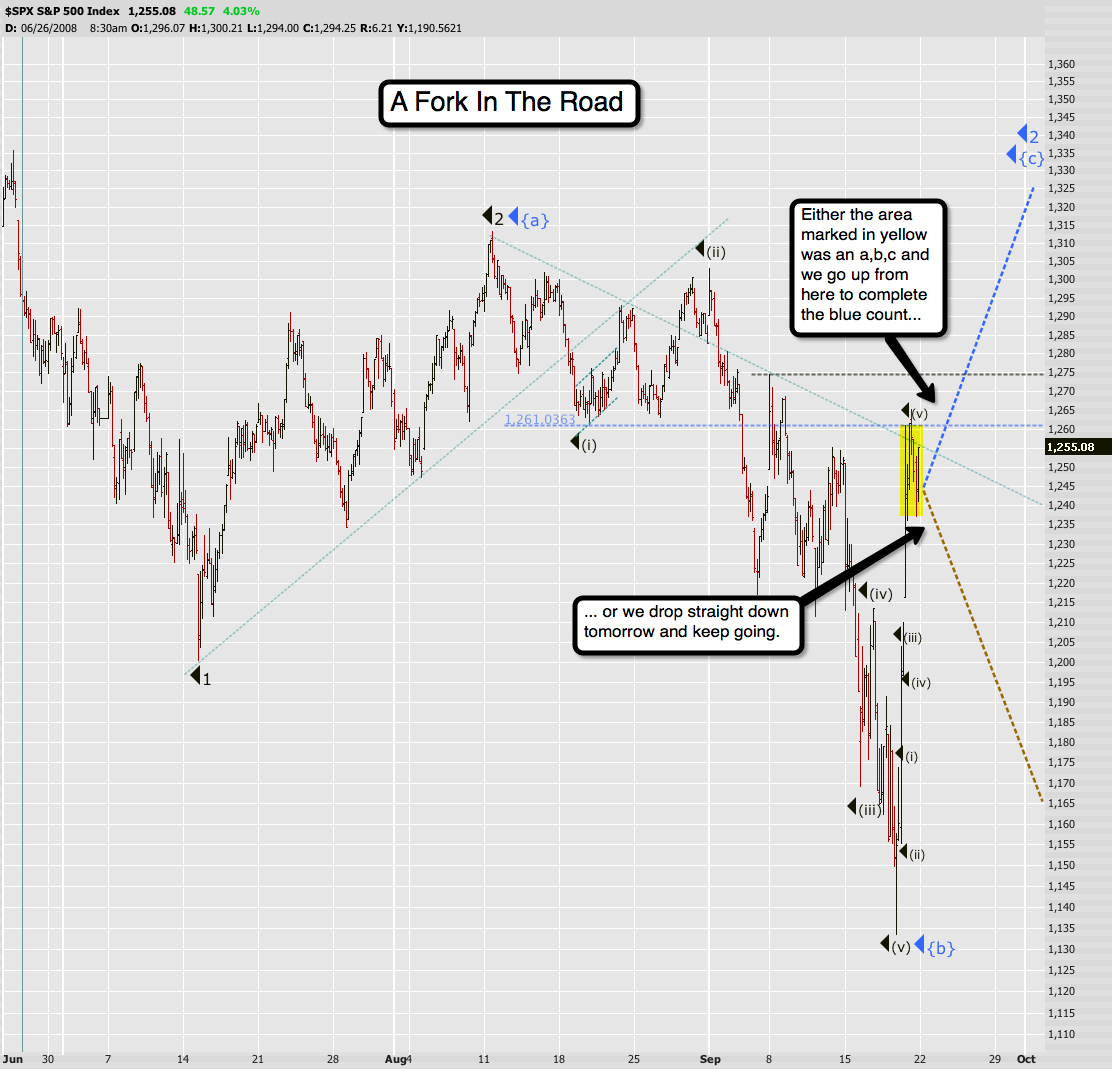 SPX at fork in the road (again).

I think the chart makes things pretty clear. The sticking point is that little correction we painted Friday after the quick spike upwards. We should know fairly soon as the wave count really does not leave much wiggle room here. We either go up straight from here and start dropping. The odds of either scenario are about 50/50 – yes, I know – not what you want to hear. But if you ask me, I would actually prefer the upwards scenario. No, I haven’t skipped my meds – no worries. First, based on the tape of the last few days it would make the most sense. Second, we would get the VIX back down to below 25 or even lower (i.e. cheap puts) and we might even get the McClellan oscillator back into overbought territory (45 and above). It would take pressure of the Feds to do anything stupid and produce more wiggle room for us bears to ride out our puts before we get near that ‘panic line’ shown above. So, we might actually dip into some calls tomorrow if things start pushing up after the open. Yes, Evil Speculator might actually turn bullish – we choose not to fight the trend. 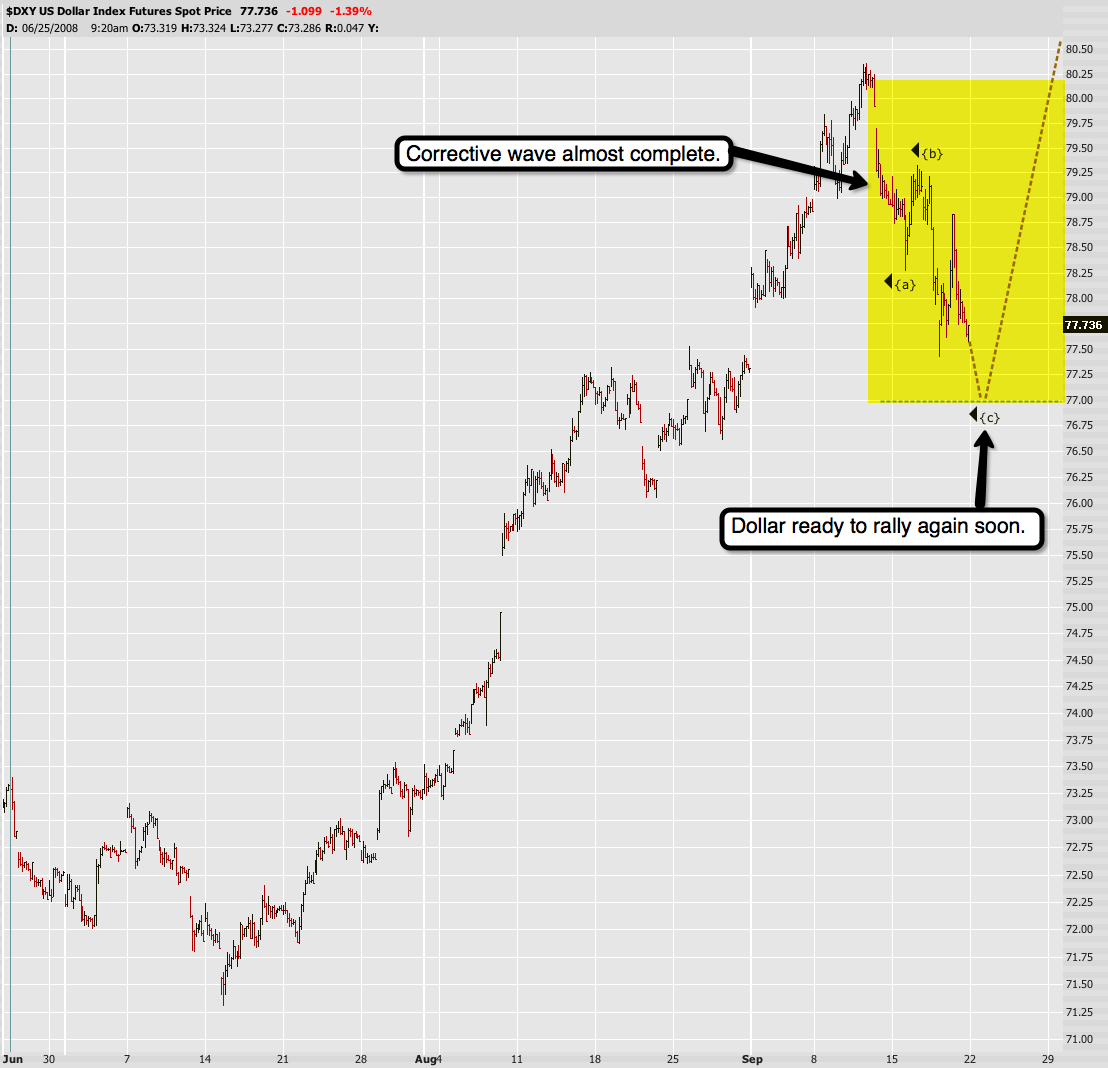 Adding weight to the bullish scenario is the probability that the Dollar should soon have completed its corrective a,b,c wave and switch back into rally mode. A rising buck should give the permabulls additional mojo, as it on the surface supports their position that ‘the worst is over’ and that the U.S. economy is again ‘strengthening’. It would also serve the political agenda of the Republican party (I’m not taking sides here – just an observation).

I won’t comment on Gold or Silver today as both are largely dependent on which way the market is going to flip. Wouldn’t be a great entry for positions here anyway and again – I don’t like the VIX where it’s at right now.

That’s all I have in me today. I think that this should prepare you sufficiently for what’s to come next week and beyond. I have a few more aces up my sleeve which I will share with you leeches when I’m good and ready. There are a few more indicators I’m working on which seem to give us a decent idea of when the market is ready to dip back down – before it happens of course. I’m working with the good folks at TOS to add a few necessary exotic feeds in order to produce a line chart I can share in future postings.

A final comment: Don’t get too eager to jump back in now and commit yourself fully right away – even once the market picks a direction I recommend you stay hedged if possible. Market conditions are fluid right now and our friends at the PPT obviously have pulled out all the stops before the November election – which is also why I actually favor the bullish scenario right now – it would be a lot easier to trade. Hey, if you can’t beat ’em – join ’em. Don’t worry – we’ll get our sweet revenge soon enough.

May the market Gods have mercy on your portfolio.