This is pretty much it folks – after months of sideways churn followed by a massive wipe out we have now reached an inflection point that will determine the character of the tape for months to come. I cannot emphasize enough how important it is for you all to pay attention – right here, right now.

The spoos are sitting on weekly support and resolution is approaching. I’m short here but am prepared to flip above ES 1938. The only chink in our plan’s armor is the fact that we are heading into a long weekend. This makes getting positioned here/today rather risky in that we most likely will see sideways tape for the coming days followed by a large gap on Monday night.

Today is probably the last session this week to expect any meaningful participation (except perhaps tomorrow morning during the ECB press conference), which complicates matters a little. But heck – I’ll be your huckleberry. For now I’m exposed only 1/2R and if the tape moves in my favor 1R I’ll be adding another 1/2R. It is important that you don’t get drawn into making large bets which could turn into very large losses on a gap higher or lower next week. 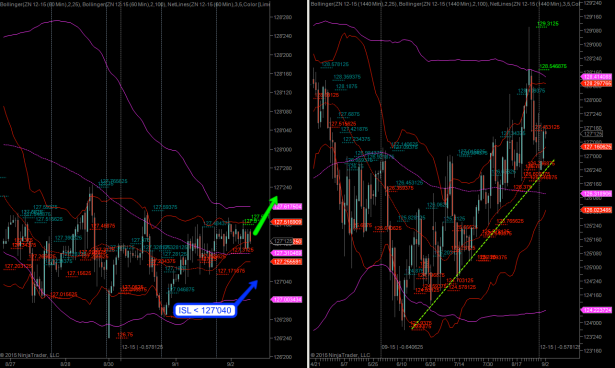 The ten year bond futures look like they are in the process of completing a floor pattern after a rather massive shake out last week. Good spot to start accumulating again IMNSHO and I’ve grabbed a bit of exposure which I am splitting with…