Is Patience Really Key For Traders? 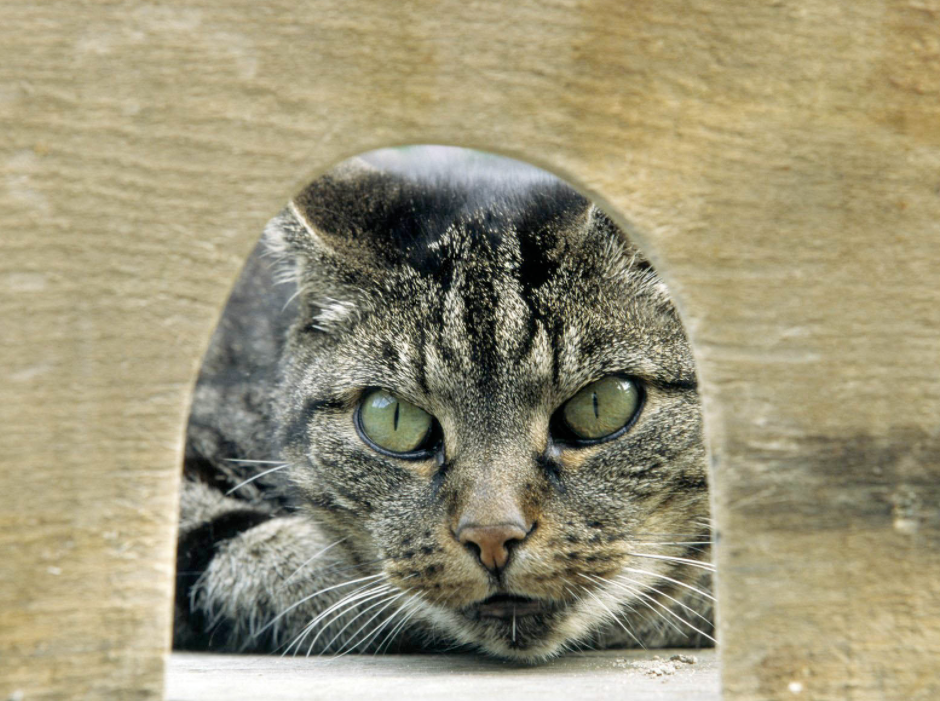 You probably can remember at least one campaign in your trading career you regret having missed out on. It’s the ‘one that got away’ despite your best efforts to grab a position when conditions started to align in your favor. For me personally it continues to be one of the biggest psychological as well as technical hurdles to grapple with: When is the perfect time to get positioned? Well, that’s easily answered of course: Just before it starts taking off!

Now seriously speaking there is a bit more to this than meets the eye. The answer to the above question actually does not like at the core of the issue and can be easily answered with ‘as soon as your entry rules are satisfied‘ which also implicitly means that you do have them. From there you can simply bite the bullet and take on a full position or attempt to get a bit more fancy based on recent or historical volatility patterns. Unfortunately however what sounds great in theory does not always translate well into practice. 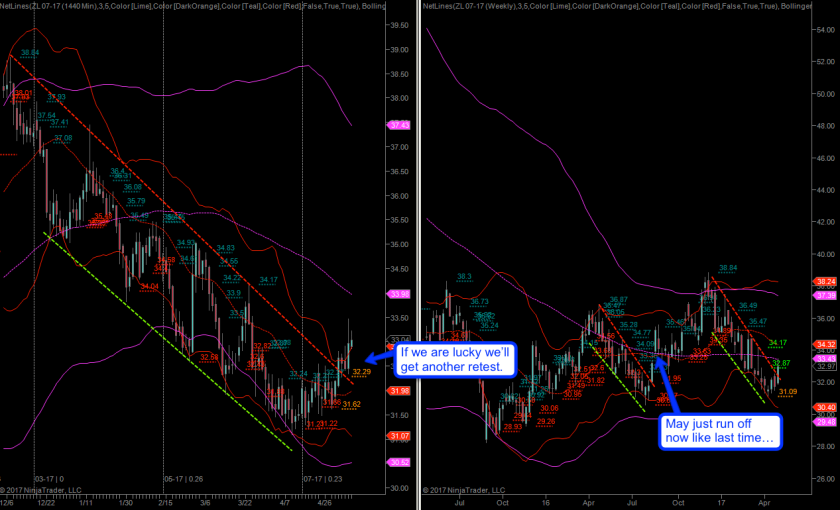 Once again I will use a current example to depict some of the real life issues at hand. Here you see a daily and weekly panel of soybean oil which my subs and yours truly had been coveting for a while now based on a weekly formation I hoped to exploit in the near future. We got a literal break last week when ZL pushed above the upper range of its weekly price channel and seemed ready to take off.

And here it is right there, the crux of the issue. You look at a price formation like that and just know that the odds point toward escape velocity without it ever looking back. Especially when it is exactly that which happened the last time around (see my comment on the weekly panel on the right). My rules told me to wait for a retest as taking the first spike can work but in many cases gets sold and thus may inflict a loss.

But wait there’s more and it is often not immediately apparent to novice traders. A higher entry does not automatically advance the entire risk range (i.e. break/even to ISL in ticks) higher as well. Unless new short term context has already been established (which is rare as the first spike is directional) one is tempted to focus on technical context in the form of your favorite indicator reading, a spike low, or some correlated long term price levels. Whatever you use, most likely it’ll be further away from your current entry price than if you had been taking the entry near your desired inflection point. And that means that your risk range is wider which implicitly also means that your position size is smaller. Feel free to play with our handy futures risk calculator – there’s also a forex version.

Entries Matter After All?

It is true that in theory entries in essence do not matter, what matters is where you exit. But in reality how you enter actually matters as it will either affect your position sizing or put you at increased risk of being stop run. Getting stopped out may also psychologically affect you and anchor you into not taking an entry when price actually returns to your desired entry range. And finally if you wind up missing out on an entry you may resort to ‘revenge trading’ which in part is a destructive practice based on subconscious self punishment and an obsession with a particular symbol. In other words – your ego or intellect was proven right as price moved exactly in the direction you had anticipated/predicted. But you feel cheated or deprived of receiving the profits you believe you deserve.

Auto Systems To The Rescue?

So yes, entries most definitely matter very much. In case you wonder, when it comes to fully automated systems you are simply shifting from one set of problems into another. As most auto systems may not be as good as human operators  in assessing price patterns (some are actually better but they usually aren’t found in the retail domain) and cross market correlations (humans are usually better) attempting to optimize entries via complex rules can quickly send you down a very deep rabbit hole.

On the other hand at least automated systems have no compunctions whatsoever about taking entries based on a set of given rules, no matter what. Which is great during periods when things go your way but can turn into Chinese water torture during extended losing streaks when that very same system stubbornly insists on taking every single entry. Clearly this is a huge topic in itself and we have covered some of it on various occasions over the past few years.

So back to soybean – what to do? My default approach always has been and continues to be to simply stick to my guns and accept the possibility of not getting positioned over getting positioned ‘badly’ (I concede that this is a very subjective perspective). In my personal experience getting a desired entry after the first emotional spike up (or down) is extremely rewarding and has the added side benefit of increasing the odds in my favor. Which IMO greatly outweighs the few times I missed out on what later turned out to be a very profitable trending pattern. 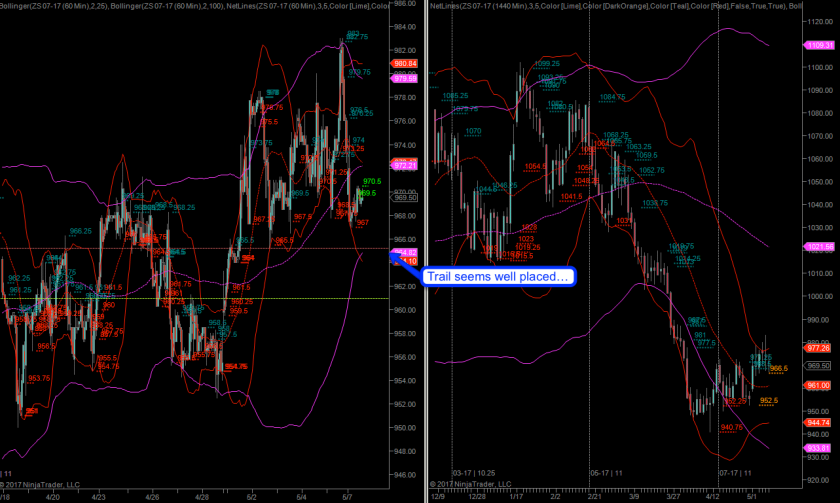 Actually we’re not quite done with soybeans just yet. Here’s soybean meal which has been a difficult patient but the current gyrations may turn into a benefit later (i.e. more technical context) should our trailing stop survive. 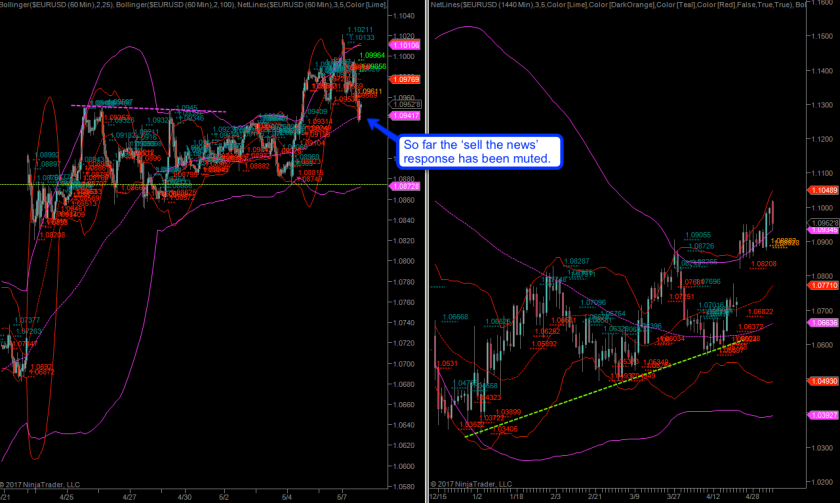 The EUR/USD campaign also has been a bit sickly but is still looking positive after the ‘sell the Macron election news’ seems to be rather muted. My stop remains at break/even for now. Should we push higher from here then I’ll advance it to below a recent hourly spike low. 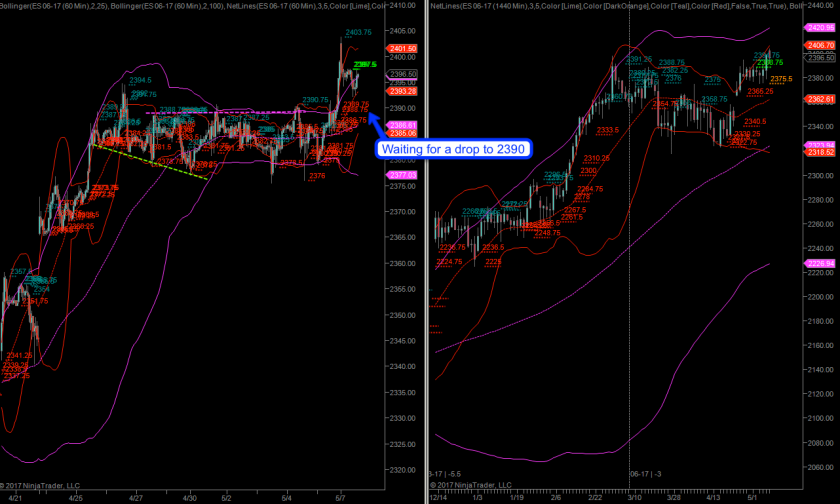 The E-Mini is looking like a nice long but only if price agrees to drop a bit lower into ~2390. My stop would be set < ES 2377. This incidentally is yet another example of what I have been talking about in my introduction. The odds actually support acceleration higher from here but last Friday was clearly not a good time to enter and for now it’s best to hold off as we may see a bit of volatility near the open.

More entries below the fold for my intrepid subs: