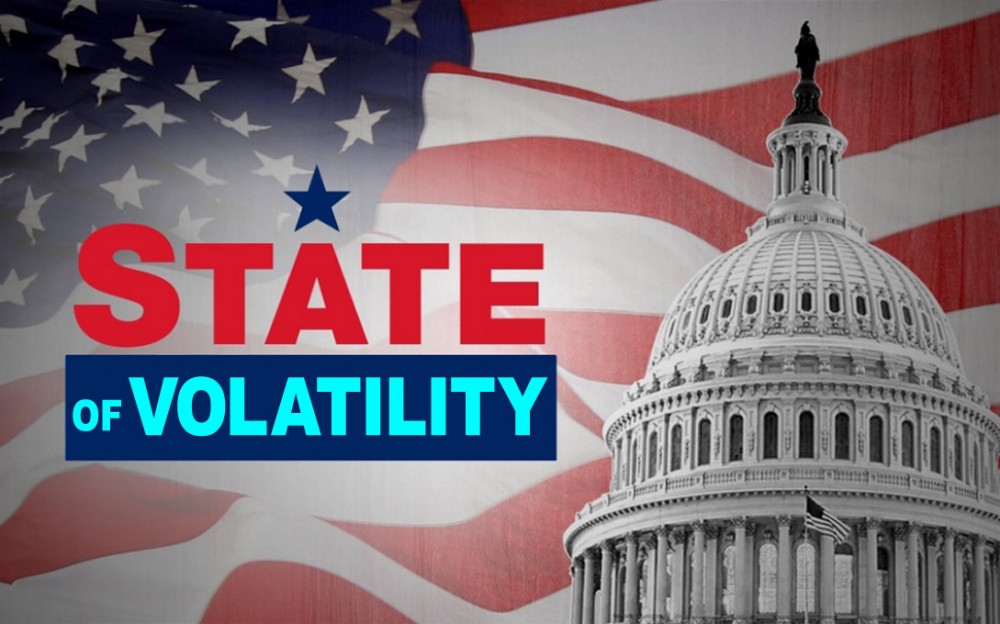 Market volatility in all shape and form has over the years turned into a personal passion and lies now at the heart of my current system development efforts. There are several reasons for this, the first most likely being one you probably have heard about before, which is that volatility appears to be a lot easier to predict than market direction. Your mileage of course, as with all things in life, may vary considerably plus as you slowly embark on peeling this onion you’ll discover there are many layers hiding below the surface.

The second reason why I have increasingly shifted toward trading volatility is lesser known but it’s actually the most important one: it is truly mean reverting in contrast to practically every price series which all in essence follow a random walk. And I’m not just making wild claims here – I have actually proven for this to be the case.

You can do this as well by simply (yes, I’m being a bit cynical here) running the VIX through an Augmented Dickey Fuller test to check for stationarity (fancy word for ‘is it mean reverting’?). Which is exactly what I did – and more:

In general, a p-value of less than 5% means you can reject the null hypothesis that there is a unit root. SAY WHAT?? Yeah, that’s exactly how I felt when I first read this back when, so I went digging for an explanation that non-pocket-protector-wearing-mortals like us could understand. Fortunately I came across lovely Mr. Nystrom who’s not just a bonafide math-genius but also knows how to explain complex math related topics but also wears silly hats:

Okay, that was different but we get it. The null hypothesis assumes the ‘boring’ assumption that this series is like all the others, i.e. non-mean-reverting. So how about the root thingy? If you look up ‘unit root test‘ in the Wiki you’ll find this right at the top:

Ahaaa! Now we’re getting somewhere. So that p-value basically gives us the odds that there is a unit root, meaning that it is non-stationary. And 5% is our standard threshold, which the VIX seems to be satisfying. Which percentage you choose for the ADF and other statistical tests is always data dependent and there is not right or wrong. You as the human being have to consider the implications of being wrong, meaning how probability of being wrong you are willing to accept. For the ADF a 5% threshold is commonly accepted. 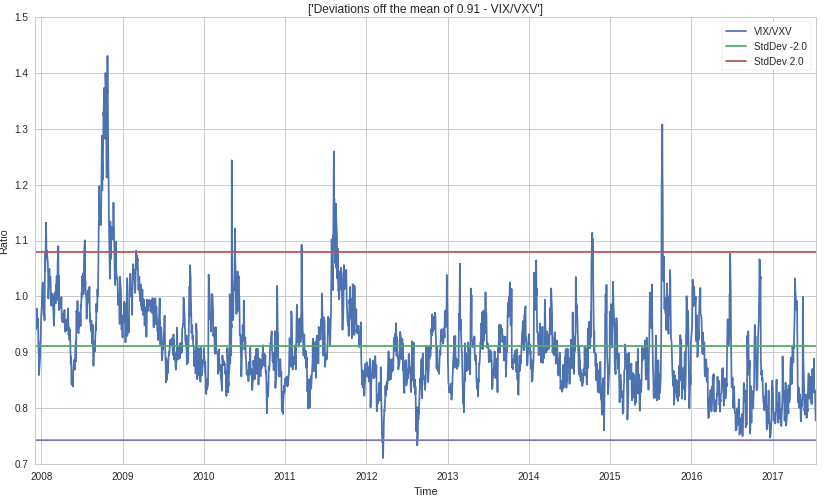 But why use those two as a ratio? Are they actually moving in relative tandem with each other? Well, there’s another statistical test called the Cointegration Test. In order to run it you need two price series of the same interval (i.e. weekly, daily, hourly, etc.) which it will test for the probability of cointegration. This is what it’s spitting out:

Don’t worry about the t-statistic, what’re once again focusing on is the p-value which has a negative exponent of 16 and that means the value is tiny. In other words, yessirree, those two are cointegrating for sure.

Not to throw too much at you today but you probably also want to test for covariance and correlation. The latter is conveniently scaled between -1 and +1 depending on whether there is positive or negative correlation, and is dimensionless. The covariance however, ranges from zero, in the case of two independent variables, to Var(X), in the case where the two sets of data are equal.

Correlation usually is more intuitive to most people and I think a value of 0.98 is pretty damn correlated. 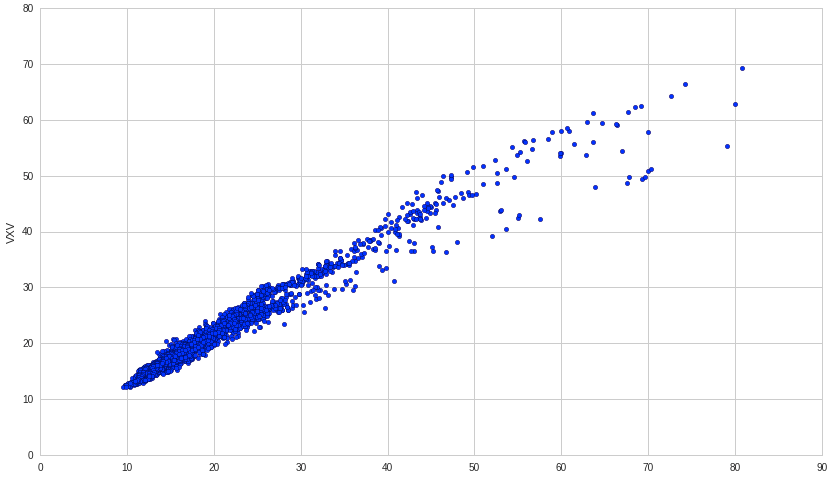 The scatter plot makes it pretty clear although we’re also seeing a tad of heteroskedasticity at work. Hey, no reason to be insulting!! Okay, I’ll explain that one another day.

Now that we actually know what the heck we’re talking about and can back it up with proof let’s actually look at some recent IV charts: 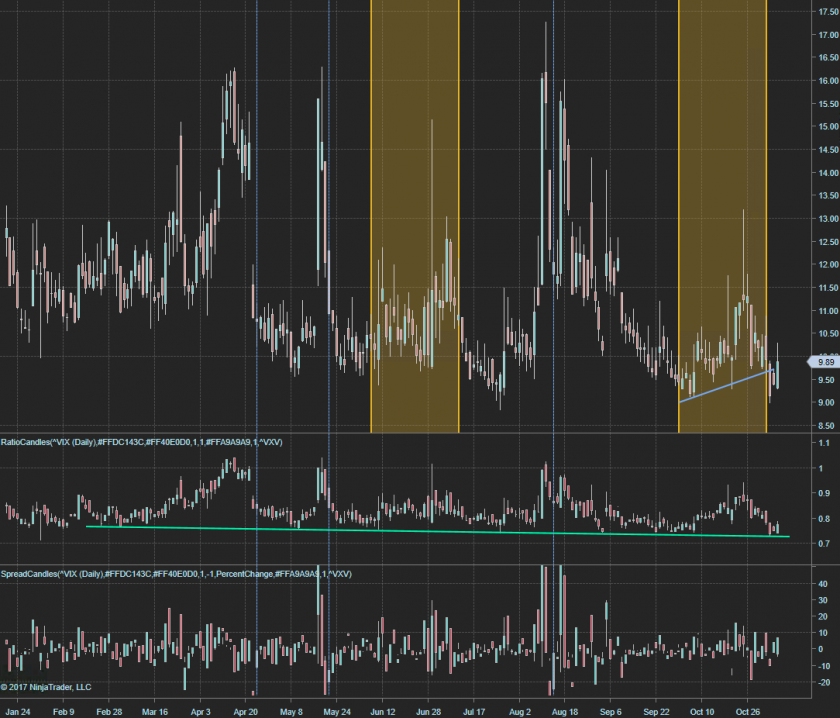 So here we’ve got the VIX on top and the VIX:VXV ratio below as candles – the first is the ratio and the second the spread between the two on a percentage basis. I know – FANCY!!

But what does it tell us? For one the ratio seems to be plotting a pretty solid support zone which we recently touched and now seem to be bouncing from. Which probably means we’ll be seeing an increase in volatility in the coming weeks and months. Most likely after the Santa Rally in January though.

But it’s just getting interesting. Please step into my lair: 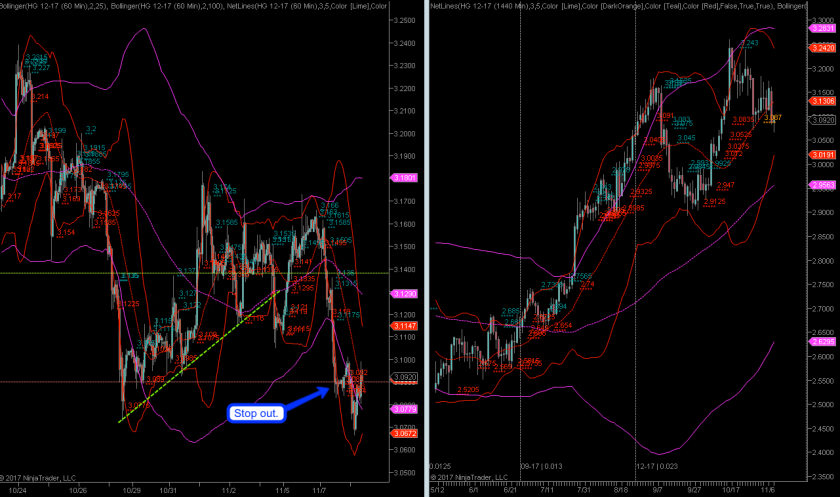 Dr. Copper not surprisingly found its maker overnight. Commodities are clearly being affected by a strengthening Dollar and for now we’ll have to be careful when picking long candidates in this sector. 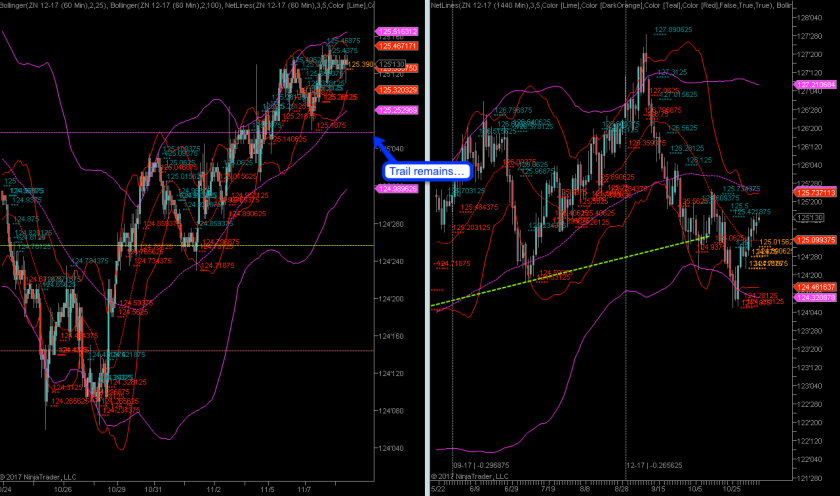 10-year bonds have however happily continued higher and our current trail remains intact until we hit 2R in MFE or a new spike low is in place. 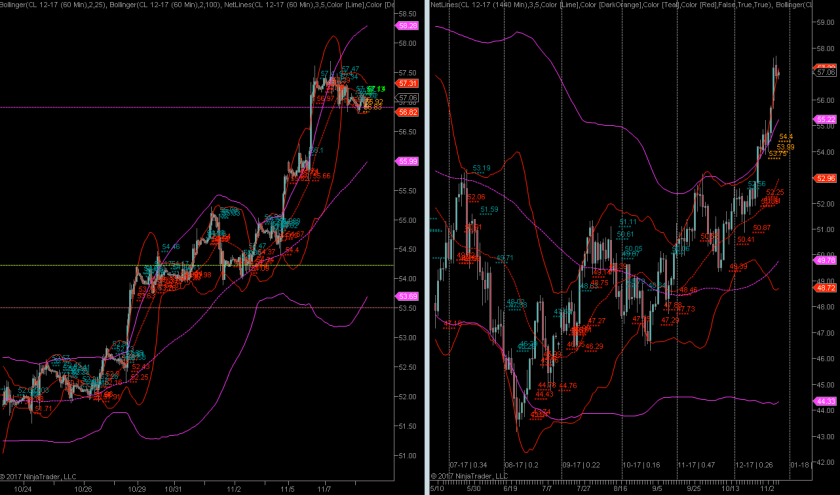 Last but not least crude which has also ended but not before leaving us with another juicy 4R in profits. That was our 2nd crude campaign in the past 2 weeks and both turned out exceptionally profitable. Wish it was always that easy!