I bet you didn’t expect to see me today – did you?

Yes, Mole is back – and with a vengeance. My first two days in Houston proved to be extremely productive, which permitted me to cut my schedule short and escape to pastures where humidity and heat indicators are not measured in triple digits. Sheeesh! When I stepped out of that plane on Thursday night I first thought Southwest had mistakenly docked their boarding bridge to the local sauna. You literally could cut the air with a knife. Fortunately unlike us stingy Europeans those Texans are not timid in their use of air conditioning – try to spend July or August in Paris and you’ll know what I’m talking about.

All kidding aside – I had a wonderful time in Texas, thanks to the hospitality and generosity of my local hosts. I’m looking forward to my next trip down there – preferably once temperatures have descended to human tolerance levels again.

The other title I was considering for this post was ‘Murphy’s Law’ – and Zero subscribers know why. Two hours after I departed for Houston on Thursday afternoon my entire network went bust for mysterious reasons. It took a reboot of all network component (i.e. routers, switches, etc.) to restore the service Friday afternoon. Those damn Gremlins sure have it out for me – I mean, what is the probability of this happening after my network has been running flawlessly for the past few months?

And of course, as so often, I missed out on a big down day. It may come to the point where long time ES readers will start shorting the market at my mere mentioning of a business trip or vacation (chance in hell) as a big move to the downside is almost guaranteed. Heck – maybe I should charge a subscription free for being away from the tape! That would be my dream job after all – you guys simply pay me for staying away and if it’s not enough I might just show up for work! 😉

Alright, let’s get to the charts – not as many as usual this weekend (Mrs. Evil demands some of my attention) but I’ll try to tell the story for next week: 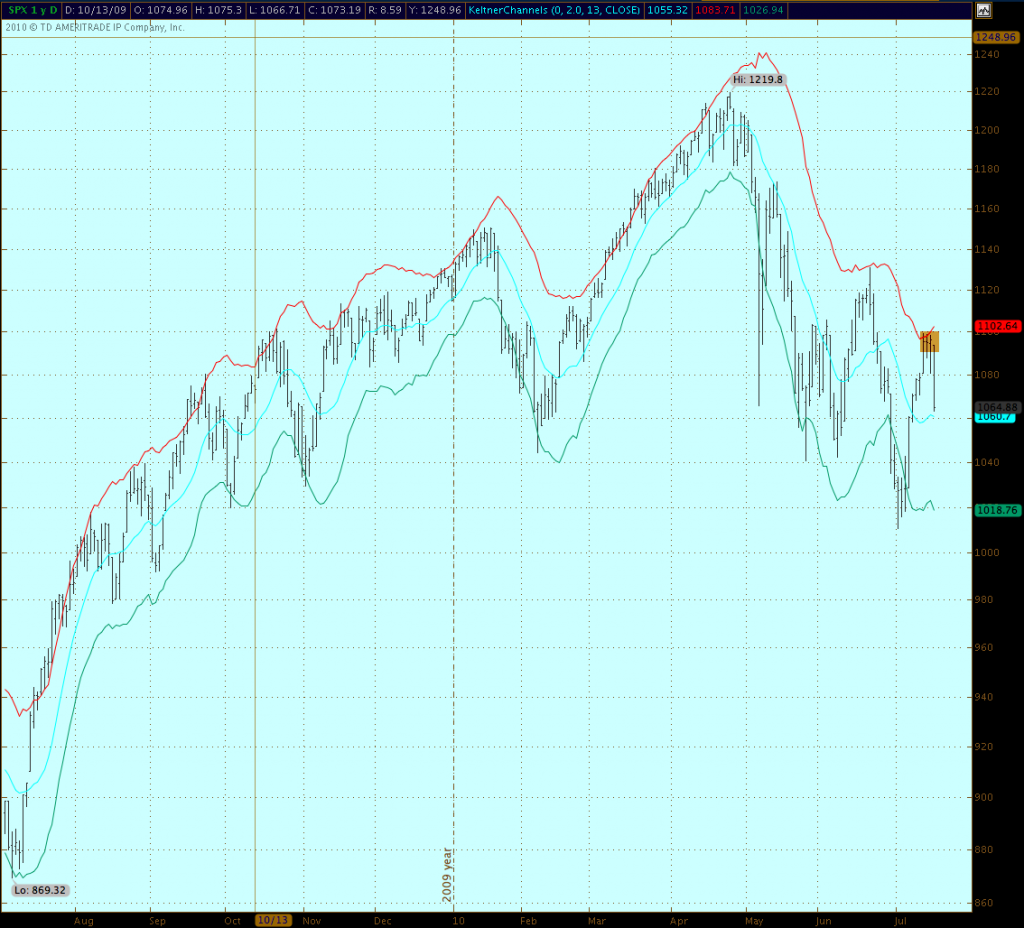 That upper boundary of that Keltner channel turned out to be one Maginot line the bulls were unable to cross with their panzer divisions. Last time I forgot to mention that this chart was inspired (i.e. blatantly stolen by me) from Chris Carolan who uses a variation of this on a continuous basis.

What I noticed when looking at that descending upper border was that it coincided with the target range I had projected for the entirety of what I am currently counting as Minute 2 of Minor 3 of Intermediate (1) of Primary {3}. Of course right now – today – I am not so sure just yet. It’s possible that this first leg up is only a Minuette (a) wave and that would mean that the drop down on Friday could be part of the (b) wave down. 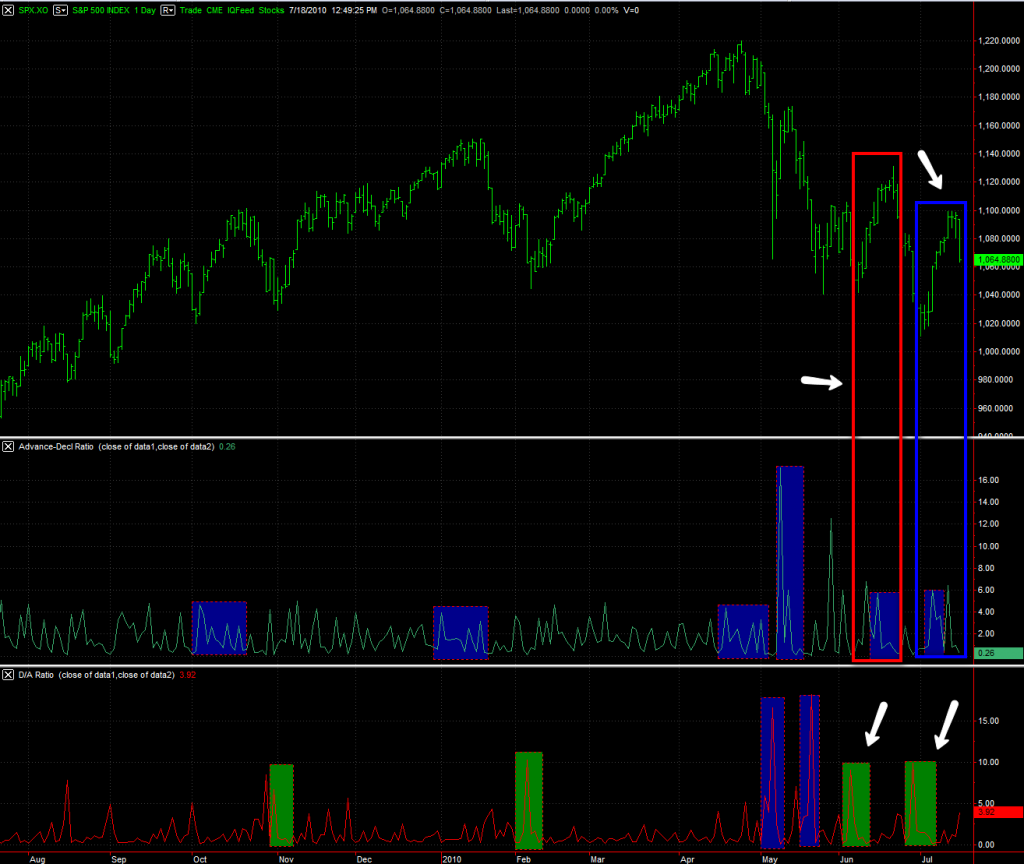 For a possible answer to that question I took a little bit of time this morning to look for fractals in the usual spots. The one that looks interesting is my trusted NYSE A/D ratio chart. As you can see we got a plethora of fractals going on here and at least on the surface it seems that the ‘fractal signature’ of the last two weeks appears to be very similar to that of the pattern observed through June. 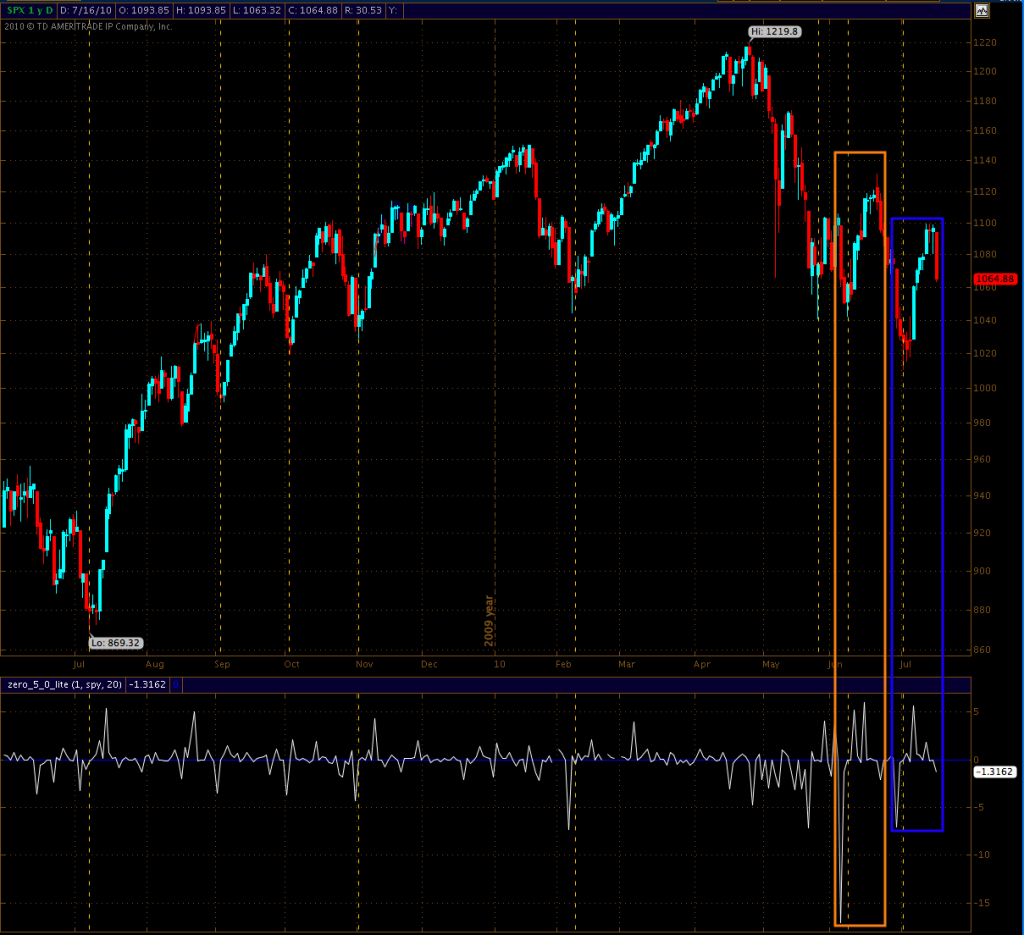 The pattern on the daily Zero seems to confirm this as it also seems to be very similar to that observed last month. Some of astute readers may have an inkling of where I’m going with this. The current count ‘assumes’ that we painted an EWT 2-of-3 wave sub division. Meaning that we painted a second Minute wave after the completion of a second Minor wave. The strength and violence (i.e. short covering) of the push up would support that theory and this would of course mean that we are now about to embark on a pretty violent third wave to the downside.

Before I get to the wave count I would like to make a comment about the term ‘fractal signature’ I proposed above. I am not sure if this is something anyone every attempted in the context of EWT but part of my current effort is to look for fractal patterns which accompany distinct Elliott wave formations – in particular in Minor and Minute degree waves. This is not a wave degree I picked arbitrarily – it plainly is supported by repeating patterns I have been able to observe on many of the daily charts I follow. I am actually suspect that many of the ‘signatures’ observed may happen on smaller or larger degrees as well.

As a matter of fact – I am willing to put my money where my mouth is: Whoever sends me a momentum indicator chart (no price chart fractals please) which clearly features repeating fractal signatures that support distinct (and commonly accepted) wave counts will receive a free month of Zero goodness. How’s that as an incentive? 😉 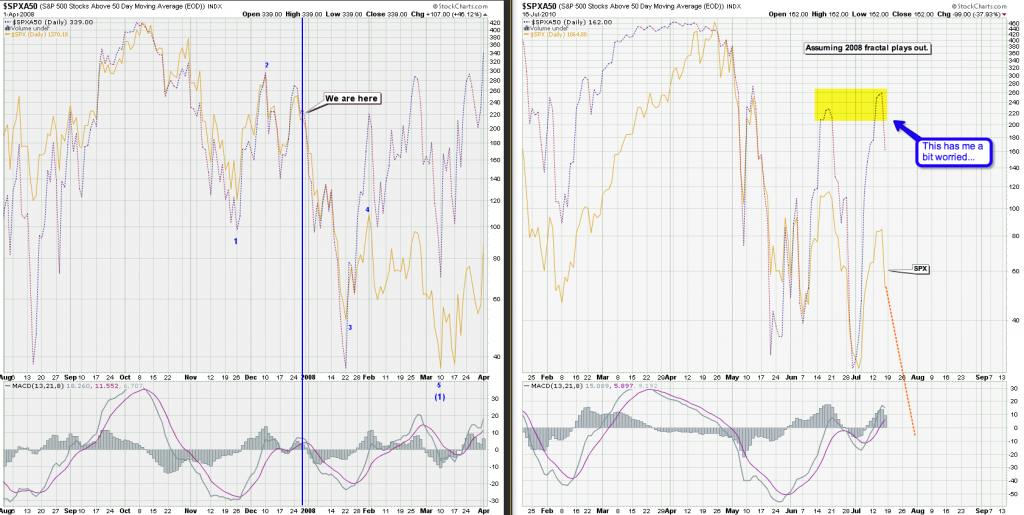 What would be a report on fractals without the SPXA50 pattern I proposed a while back? Well – we seem to follow the script thus far, however that second spike up was a bit higher than I had anticipated. That may potentially point toward Soylent Blue or worse – but I concede that we are not dealing in absolutes here. Every wave pattern in history has its own characteristics and in the end are not identical – which makes tracking them as much an art as a science. 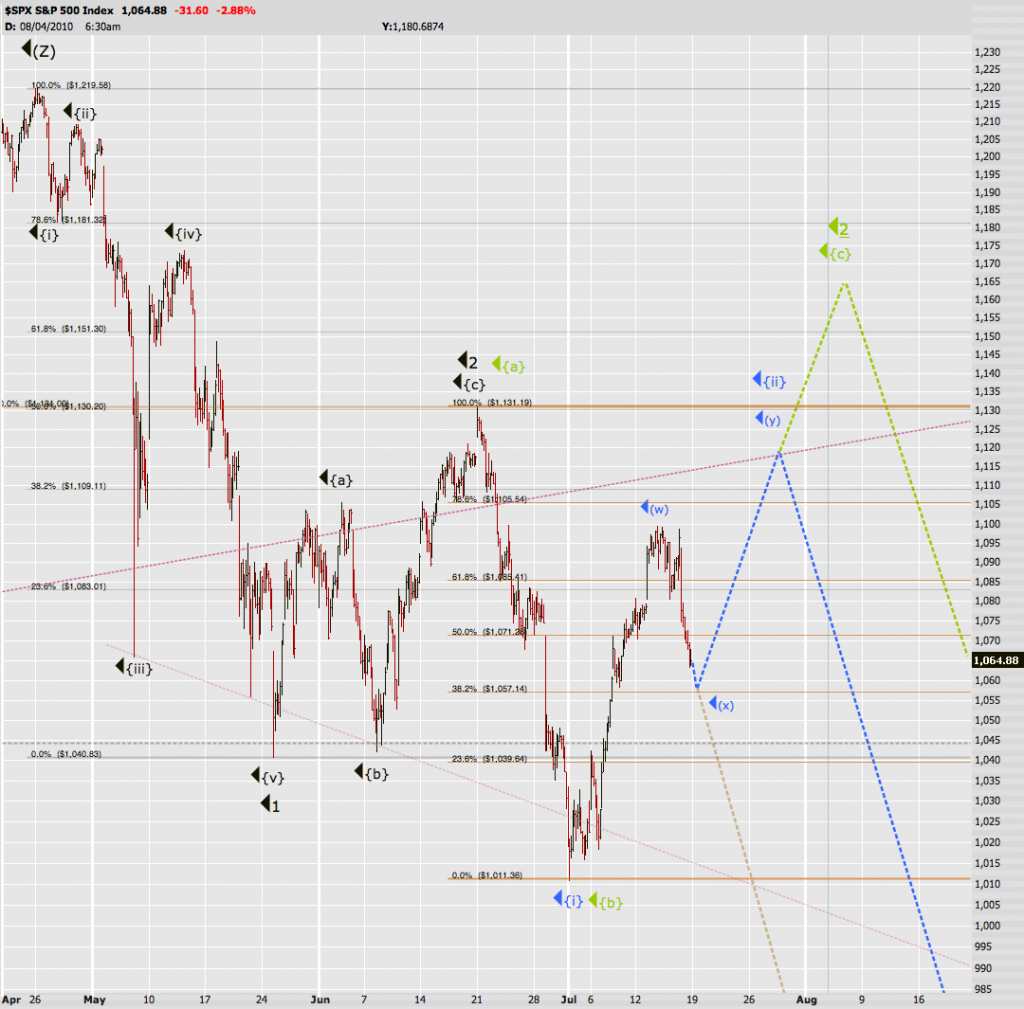 Call me paranoid or just plain old suspicious by nature – I still don’t think Mrs. Market is going to make it that easy for us. Which is why I still believe that Soylent Blue should remain our preferred scenario until a breach of clear support tells us otherwise. Supporting the Soylent Blue scenario is the wave pattern of the past two weeks which looks a lot more like a motive wave up than any of the eleven EWT sanctioned corrective pattern I could propose. The push down could be counted as an a-b-c – but it’s not exactly one for the textbooks either. But generally I don’t count that small and instead focus on anything Minute degree and up.

Soylent Green of course also looms and is at this point merely an extension of Soylent Blue. The targets I have painted remain a possibility if bullish animal spirits once again kick into overdrive.

But what about Clockwork Orange, Mole? How about dropping into hell from here?

Well, the good news is that we should know very soon. See, if this is truly a third wave plus if the fractal patterns suggested above continue we should soon see some very strong down days, starting Monday or Tuesday at the latest. And that should lead to a breach of the 1010.91 low before July is over. Frankly, it’s that easy. There should be no humming and hawing around – if this is a third of a third then it’s straight down from here – period.

Until that happens – stay on your guard and expect the worst. If we see obvious signs of support and floor painting early next week then you may consider dropping some of your coin into a bull call spread. A 107/111 may be good medicine. 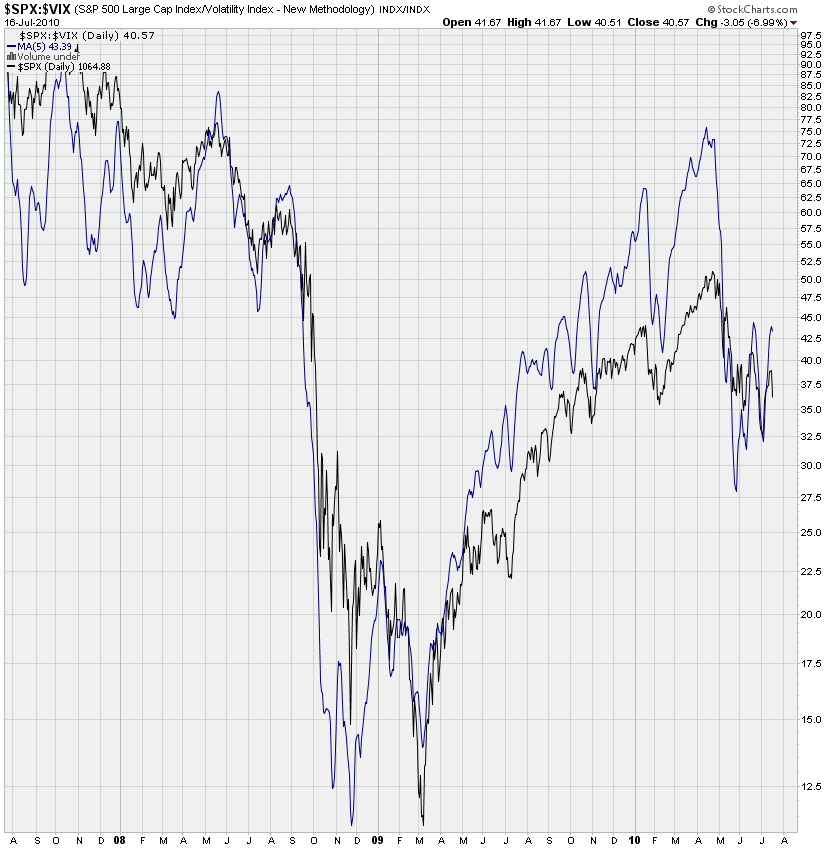 Before I run here is one chart that addresses some of the chatter I saw in the comment section of the last thread over the weekend. A keen observation was that Friday’s sharp drop was not reflected in Mr. VIX painting a equal up candle. The argument here was that big market players were purchasing calls at the end of the session or that volatility was pricing in a ramp to the upside. Now, that may be the case but quite frankly, as so often a common mistake forgotten by traders is that correlation does not equal causation.

I have plotted an SPX:VIX ratio against the SPX to look for hints when sharp drops or sharp rallies were accompanied by possible divergences. Quite frankly – it’s mostly hit-or-miss – sometimes you see a divergence but equally often you do not – many times you even have a delay. I frankly believe that the ISEE is a much better predictor of extreme situations, and admittedly it focuses on the retail trader. But even institutional traders are often wrong, and as such market makers implicitly price the VIX at what they perceive the current risk ratios.

Does that mean that we won’t get a rally next week? Of course not – I merely think that purely looking at VIX/SPX price divergences is the way to go when attempting to predict traps set by institutional traders – I hope this makes sense.

Alright, I have various momentum charts I could post again but many of them have only changed slightly in the past week or so. At this point we should focus on the situation at hand – which is the wave pattern and quite simply where prices go early next week. Follow through after a big move means a lot, especially in the bear camp – and the onus now is on the bears to either turn this into a big bear party or installment two in the summer of pain.