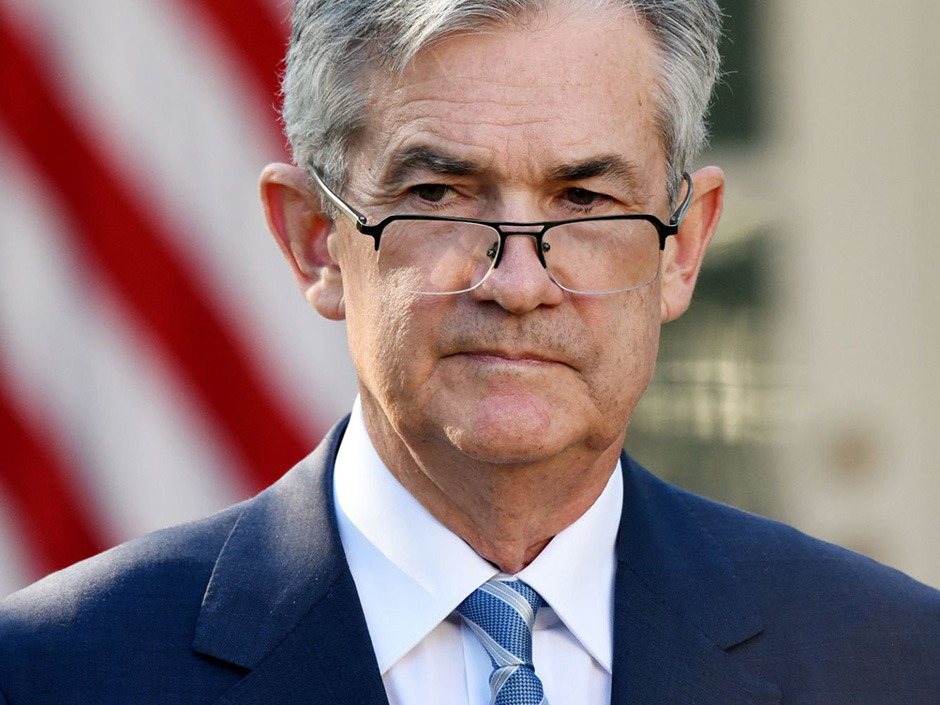 I am sitting here with a huge grin on my face attempting to articulate my joy over what happened yesterday. And despite the title of this post it has very little to do with Jerome Powell and the massive put he issued to the U.S. equities market. Once again the financial MSM does not see the forest for all the trees by proclaiming that market participants ‘didn’t see this one coming’. Oh really?

I beg to differ as I have it on good authority that volatility ETPs across the board have been hard to borrow (HTB) for institutional traders for over a week now. Please understand that while this may be a common occurrence for retail rats like us, but it is rarely an issue for big players who generally enjoy supreme liquidity via exclusive institutional FIX based platforms. So I guess it all depends on whether or not you were in the know. 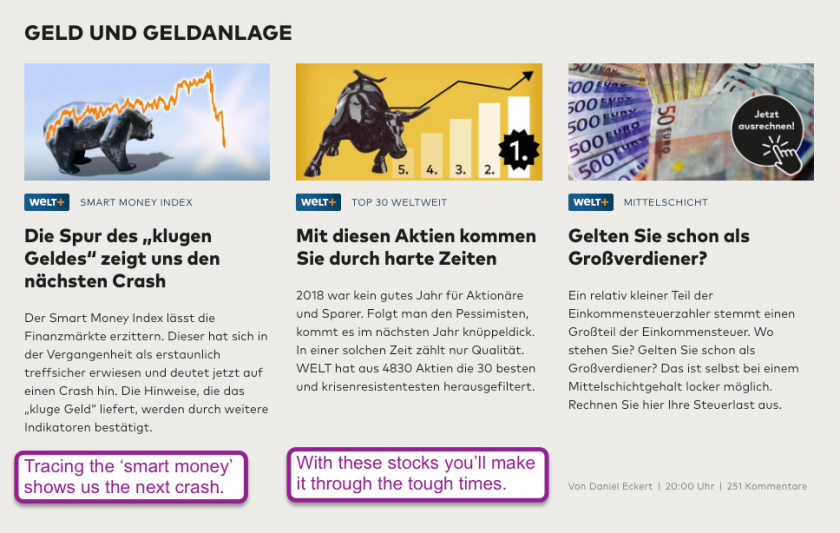 But I digress as that’s not the real story either. What is however relates to the entire financial media cabal once again ‘knowing’ that a new bear market was in the making and that we were steering straight into the next 2008 style wipe out. The snapshot above was taken over at the online edition of the German Welt a few hours before the Fed’s announcement and goes to show how retail continues to be hoodwinked into making horrible trading/investing decisions. Which Germans these days, I hate to admit, on average seem to have a special knack for.

Now it’s quite possible that the market turns on a dime again today. But it wouldn’t matter as anyone holding short positions got taken to the woodshed yesterday. Which once again makes the point I have been trying to beat into your collective brains over the past nine years right here on Evil Speculator: So many of you keep hoping for a bear market but believe me when I tell you that this is the very last thing you want to see happen. But if it does…. well….

Anyway, if I just described you then repent for your sins by signing up as a member allowing you to enjoy the benefits of an unbiased perspective that may actually aid your trading as opposed to recurrently luring you into death traps. 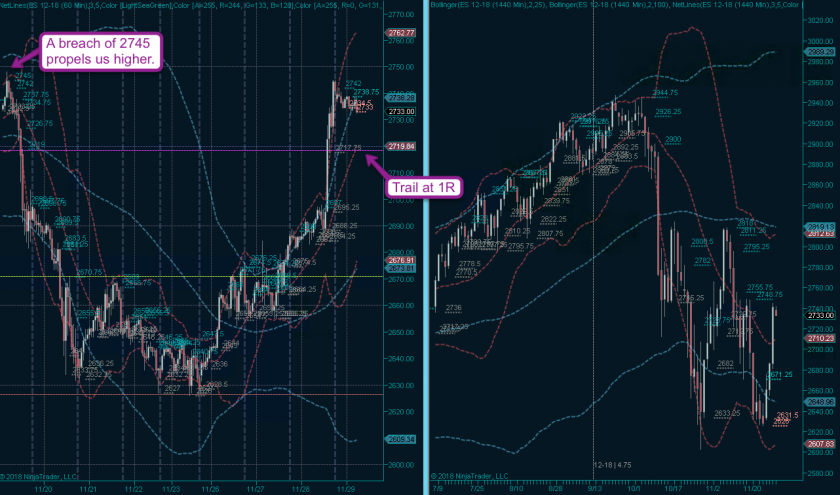 Alright, let’s get to our campaigns. A breach of 2745 propels us higher but until that happens it’s possible that the big bad bear may try to safe his hind by snarling and clawing its way out like cornered animals are known to do. But a pop > that threshold and it’s most likely back into the cave for the grizzlies until January. After that anything may happen but we’re not there yet. 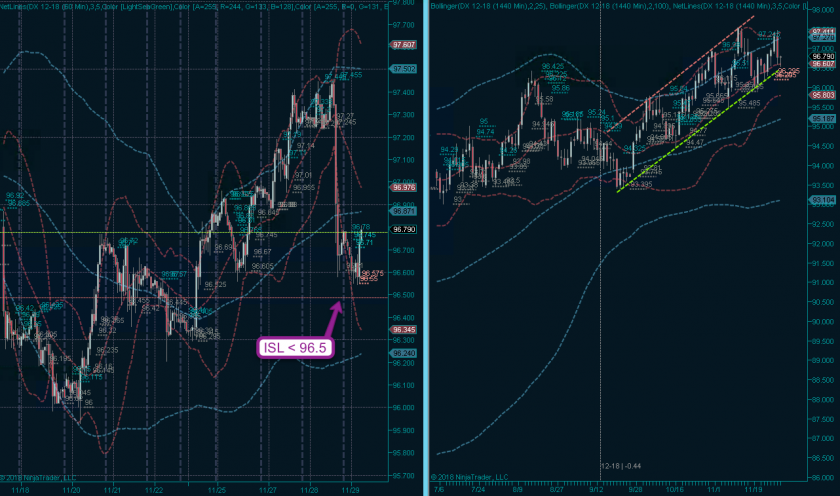 I got kicked out of the Dollar campaign at break/even. Very annoying and I jumped right back in with a stop < 96.5. 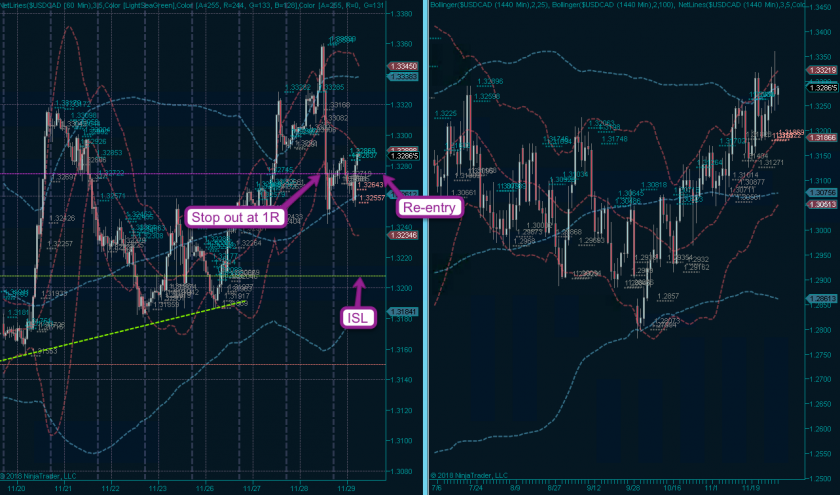 More pleasant story on the USD/CAD – stop out at 1R and I re-entered after it produced a retest of the new hourly spike low. ISL goes to my original entry point, which is conservative but I intend to hold this one for a while.

No new positions otherwise, let’s see what happens today and especially tomorrow. It’s not unusual to get a sideways session or two after a big move, so don’t jump to conclusions if you don’t see continuation higher today. The bearish scenario isn’t dead yet but would almost immediately have to exhibit market weakness to once again gain credibility. I won’t rule that out until ES 2800 has been reconquered.