When Not To Be Bearish

All our FX and commodities setups are pushing in the right direction and I hope some of you took entries when the pickings were good yesterday. I really don’t see any new compelling setups today and as the tape is churning sideways there’s nothing to add to the inflection points I presented in my previous posts.

So let’s take this day as an opportunity to talk a bit about trading psychology. As you may recall we’ve had a failed short setup last week, which was a lottery ticket trade that (as expected) got us stopped out. That particular trade was a rare short term opportunity and given identical condition I would give the very same recommendation. In general however, and in particular in recent months, we have been rather bullish here at Evil Speculator as we saw little reason not to be. Which brings me to today’s theme and one that should be taken to heart especially by retail traders: When not to be bearish.

February is supposed to be a very bearish month and although I do not rule out a meaningful correction near 1356.48 I would recommend that everyone take a hard look at the simple spoos chart below before taking out any long term short positions. 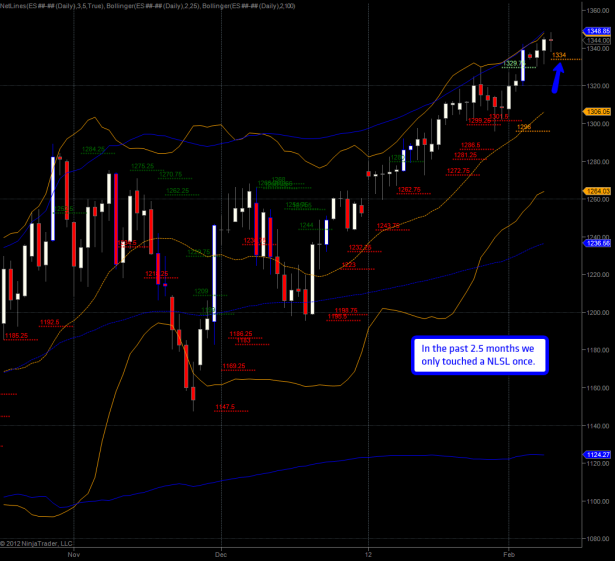 What’s particularly interesting about this is the fact that we have touched a Net-Lines Sell Level on the daily ES futures only once in the past 2.5 months. And that breach was reversed the very next day and then continued to bubble higher. And all that despite clear divergences on the momentum side, an ensuing VIX sell signal, and über-bearish news galore every time you turn on the TV. Clearly the market was not paying any attention to any of the aforementioned and merrily continued to bolt higher – despite and perhaps just because of it.

Once we reach SPX 1356.48 we will yet again have a small opportunity of a reversal and even if I take a out short position and the trade goes my way I would be very very quick to take profits. I simply do not see any compelling reasons to be short right now, at least not on the short to medium term side. As Jesse Livermore learned a long time before any of us were even born: When it comes to the trend – always follow the flow of least resistance.

For a more in-depth analysis of current market conditions I strongly recommend you read my weekend post as I provided ample evidence and correlations to prior comparable periods.

On the chart above I have pointed out our current NLSL – and if we see a breach of that it could potentially lead us a little lower. As suggested above I would not let this run too long however and expect support kicking in near 1300. If we see acceleration my next target would be 1260 and if that fails 1240 is where the 100-day SMA would provide ample support. Of course all that is mental masturbation until we actually see a reason for a short trade. Until we breach a daily NLSL or get near SPX 1356.48 I see very little reason to look down.