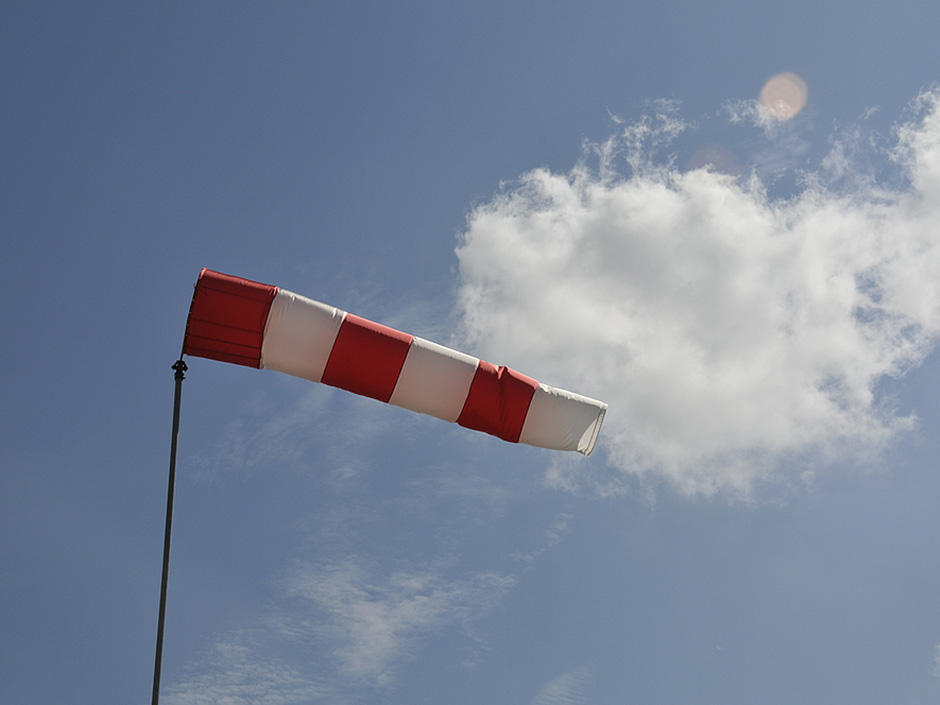 Participation on the trading as well as the comment front is apparently slowing down a bit, and not surprisingly as we are approaching the mid year summer hole. Not my favorite time of the year by far, but as always I’m punching through the boring tape as best I can. Actually I was thinking that reposting some of old classics from the educational section may be a good way to keep you guys entertained and focused on the mission. Which is probably something I’ll be doing occasionally now, starting tomorrow when I expect markets to devolve into a slow crawl. 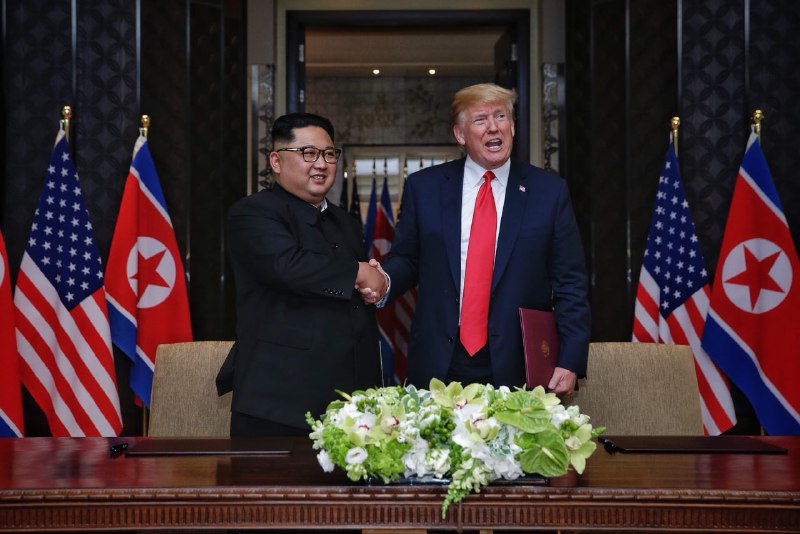 So it seems like that Kim-Jong-Un and President Trump are best pals now after having met in Singapore overnight. After the obligatory diplomatic rituals and fanfare the meeting concluded with a one page agreement being signed, at least on paper committing the DRKP “to work toward complete denuclearization of the Korean Peninsula.”

Admittedly this agreement is a lot more symbolic than anything else and won’t mean much in the face of the frequently erratic behavior that has become emblematic of the North Korean regime in decades past. But let’s not be too pessimistic, this is great news for the entire Korean peninsula and a clear win for U.S. foreign policy (for a change). If nothing else it’s better than the saber rattling, brinksmanship, and nuclear threats we’ve gotten all too used to by now.

You may remember that I’ve been visiting South Korea several times a few years back and in the process developed a deep appreciation for the Korean people and the country’s rich culture. I even taught myself a bit of Hongul allowing me to read street signs and find places on a map. Unfortunately reading Hongul and actually speaking Korean are two different pair of shoes. But it’s a great country full of hard working industrious people, thus my hope is that the North and South will continue on a path toward peaceful coexistence.

And who could resist their dance moves? Try to keep up Kim-Jong-Un! 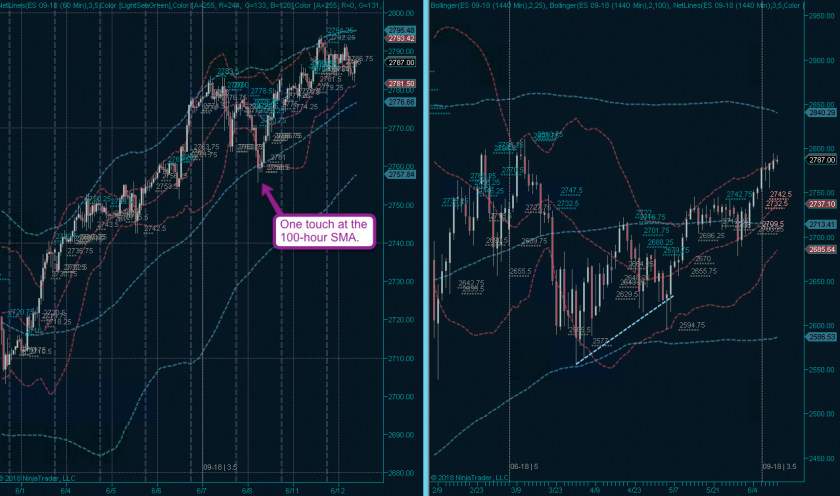 Alright, let’s talk tape. The E-mini continues to point higher and we’ve only counted a single 100-hr SMA touch over the past week or so. That’s a pretty solid ST trend here! 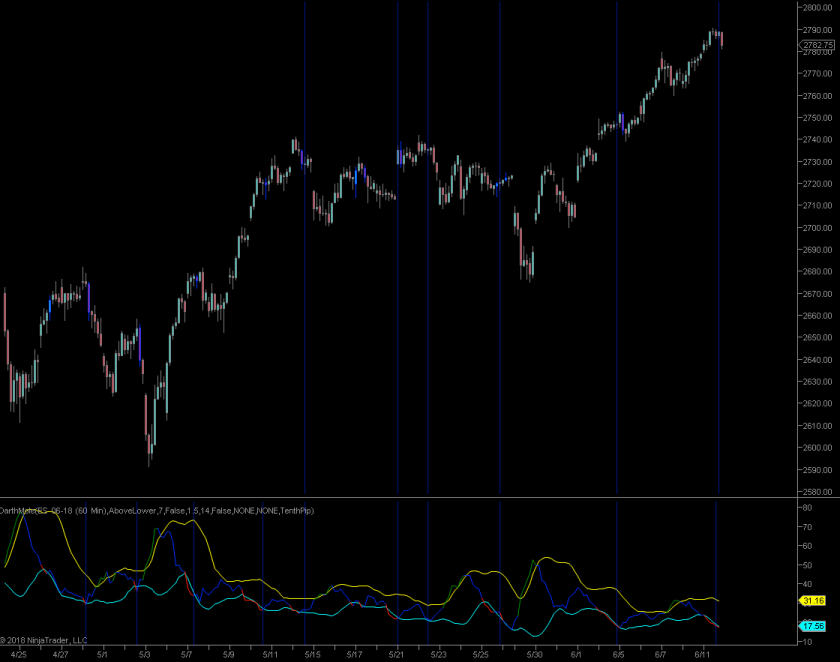 However the realized volatility profile suggests that we may see a little change of direction now as momentum has pushed the RV signal back below the lower Bollinger. So if you’re a swing trader then now may be a good time to start paying attention. And if you’re a Zero subscriber then any potential bearish divergences may be worth watching out for. 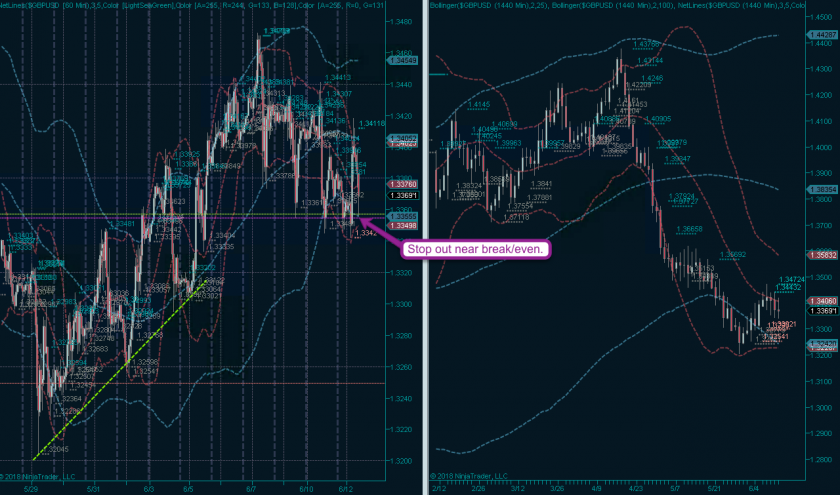 Whatever I have running right now was taken last week as I’m not too eager to get exposed ahead of all the central bank announcements. Now cable got stopped out yesterday, fortunately at at break/even. Seems like this floor pattern will need a bit more time to firm up. 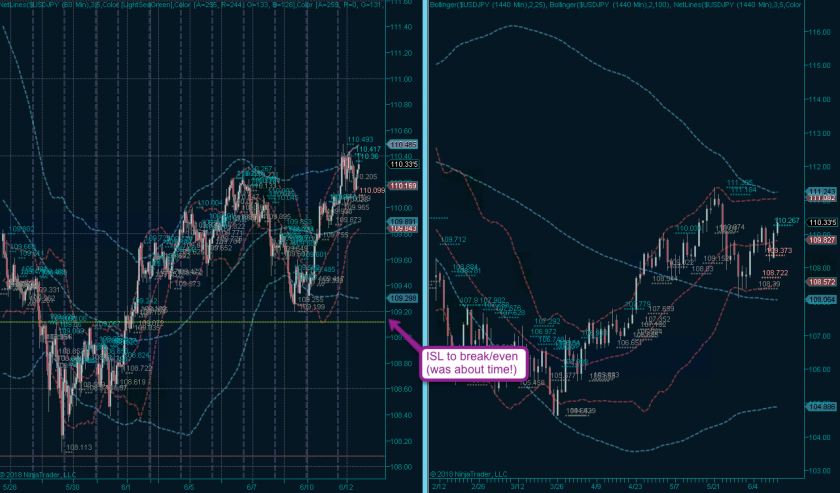 USD/JPY has been a long time coming and it’s finally time to advance my stop to break/even. 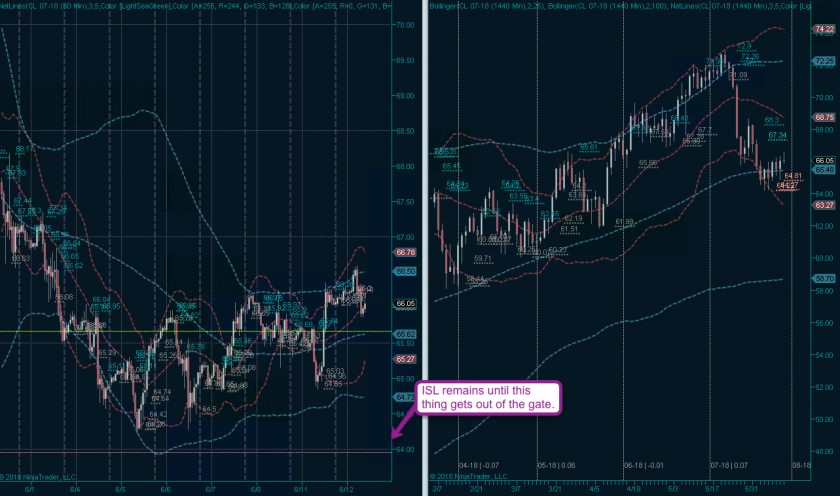 Crude is looking a lot more positive than yesterday but my stop remains at break/even. I love the formation on the daily panel, 100-day SMA with a spike low and all, but it’s possible we’re going to see one more drive lower.

Slim pickings otherwise this week, so it may be time to use our time more productively with a bit of educational content. Otherwise I still have an extended debugging session ahead of me today, but I’ll pop by the comment section a few times when I can.