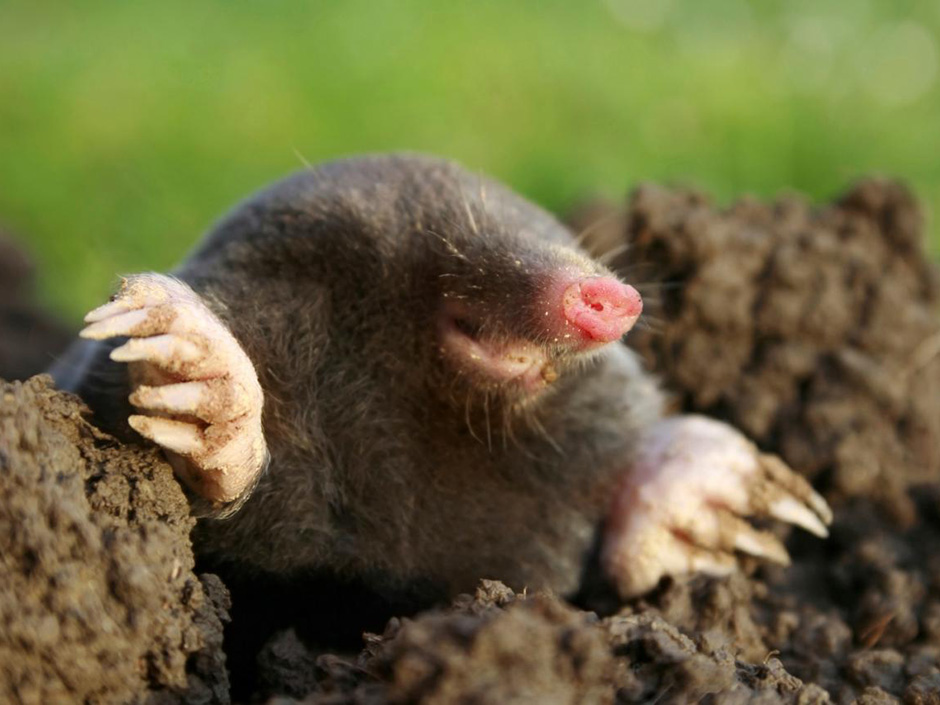 I promised you a comprehensive momo update and just like a Lannister the market mole always pays his debts. Except here at the lair you won’t have to wait almost two years for new episodes. Come rain or shine, I deliver daily and I’m known to spoil my intrepid subs in particular. That said, if the GOT producers get away with taking an 18 months break, all the power to them! 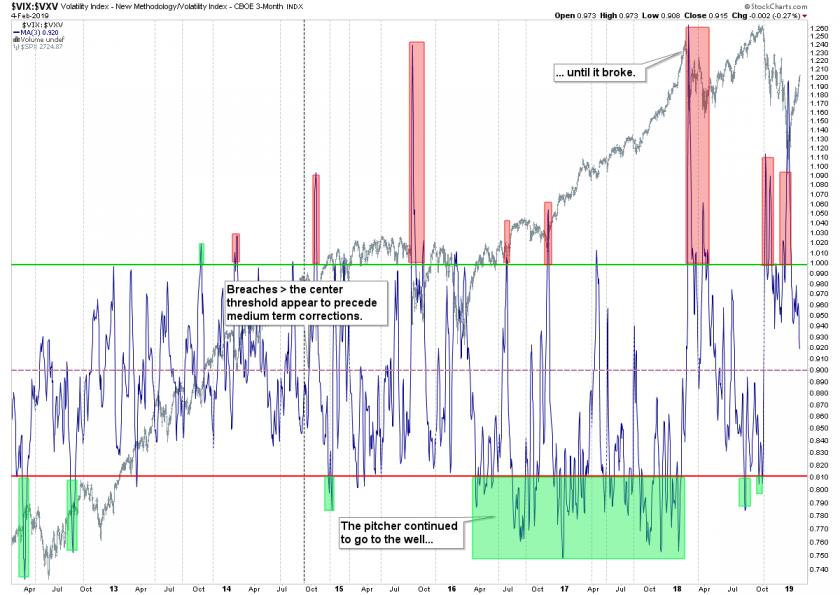 Okay let’s dive right in. I’m pretty elated to see the Implied Volatility Term Structure continue dropping toward the 0.9 mark. Which incidentally is the separation line between bullish and bearish MT cycles and thus a critical threshold for VIXEN, my IV trading strategy. 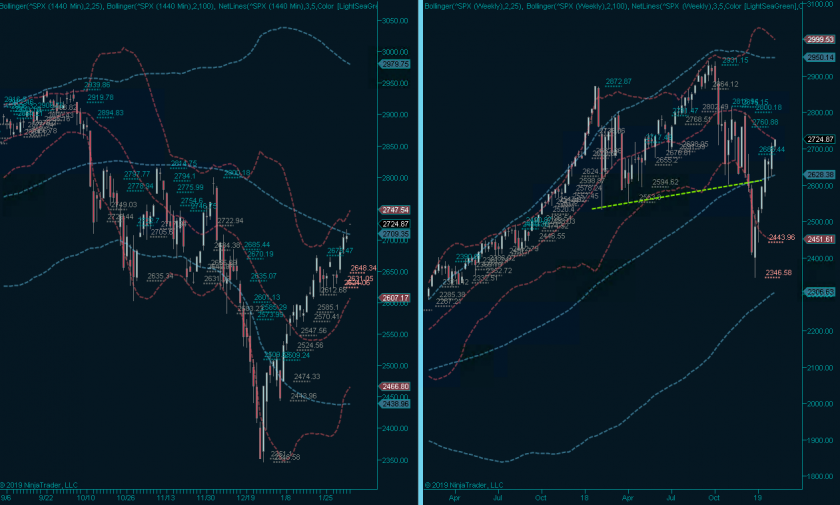 VIXEN had been [intentionally] pretty quiet over the past quarter in order to stay out of bad campaigns, which of course was driving some of my subs crazy. But as a whole they exhibited amazing patience and quietly stuck with it.

If SPX 2730 can be conquered then I think we are on the road toward ‘normalization’ – an admittedly vague term I use to describe a situation when the bullish side once again starts to have the highest odds. 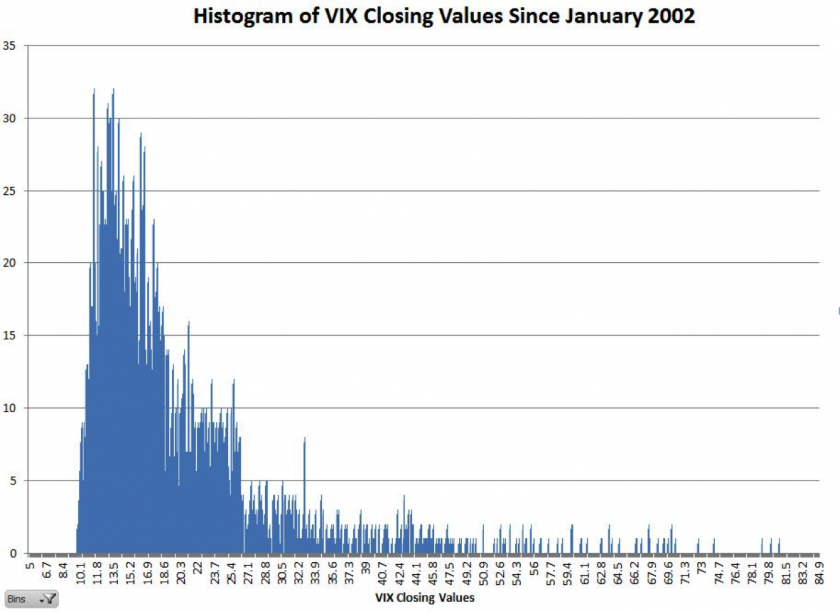 So range bound markets are actually the most common condition that traders will see throughout their trading career but it is there where price discovery takes place. Tough racket for financial bloggers!!

A major misconception shared by many retail traders, and one that seems to be nearly impossible to cure, is that markets MUST correct downward after a certain threshold has been passed.

I have probably forgotten about more predictive measures feeding this flawed assumption than the few (equally flawed ones) I care to remember, e.g. retracement levels, pivot points, RSI, MACD, and even simple Bollinger bubbles.

Fact is that markets can and will continue to run way beyond your wildest imaginations. They could turn on a dime tomorrow (right after I wrote this) or they could turn six months from now. We just don’t know, which is why we don’t spend time projecting and simply follow the tape. 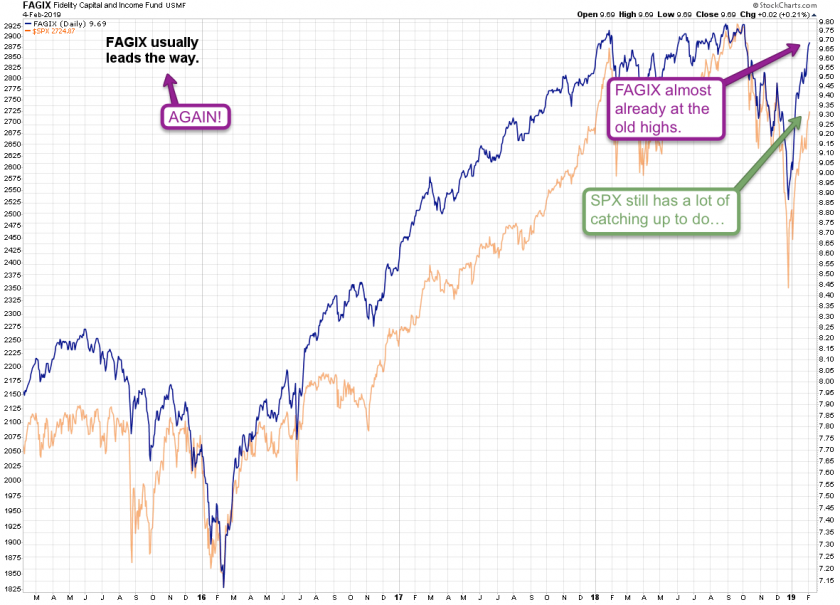 I often use correlations in order to gauge investor sentiment and the FAGIX by Fidelity lines up particularly well with what’s happening in equities. And what it’s telling us is that appetite for high performance income funds has almost returned to its all time highs.

YES, once could make the assumption that this is ‘too high’ and that it’s doomed to fall off the plate soon. Then again, one could have made the same prediction all the way from ~summer of 2016 into late 2017.

Fact is that the SPX is actually lagging the FAGIX and once the latter is starting to turn lower (divergent to the SPX) THEN it’s time to get nervous. Thus far it continues to point up. 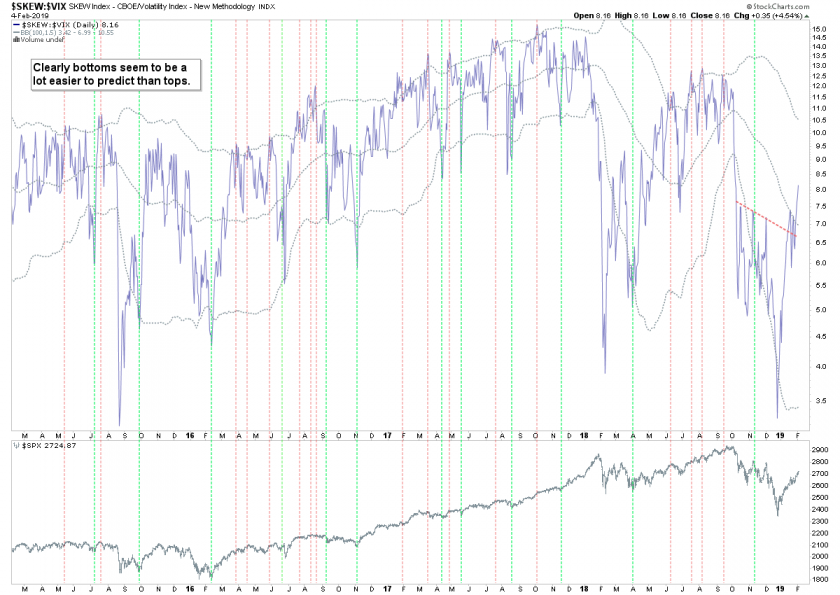 SKEW:VIX has decidedly cleared two layers of overhead resistance and is now hovering across cloud cover. One more retest of the 100-day SMA cannot be ruled out but I expect the bulls to put up a fight this time.